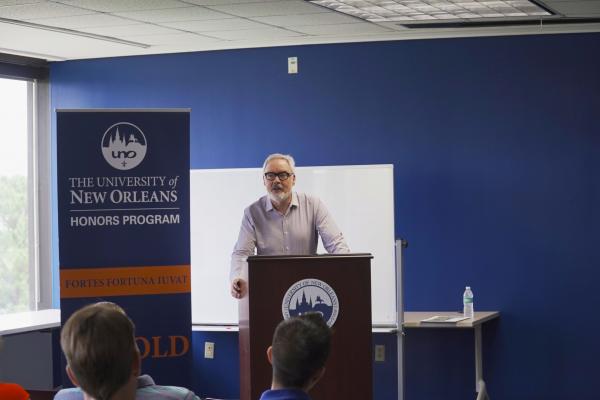 Author and historian Thomas Sugrue discussed research that formed the basis for his book, “Sweet Land of Liberty: The Forgotten Struggle for Civil Rights in the North.”

Jim Crow lived in the North, too. Just as the South has its historic struggles with segregation and race relations, African Americans waged similar battles for equal rights in northern cities and businesses, author and historian Thomas Sugrue said.

Sugrue, a professor of social and cultural analysis and history at New York University, spoke at the University of New Orleans as part of the Honors Program’s spring lecture series, and discussed research that formed the basis for his book,  “Sweet Land of Liberty: The Forgotten Struggle for Civil Rights in the North.”

“The North and South were different, but Jim Crow discrimination and segregation were every bit as common place north of the Mason-Dixon Line as in the South,” Sugrue said.

In the South, segregation and racism were the rule of law and often enforced with public displays of violence towards African Americans that eventually became international news.  Southern cities like Birmingham and Montgomery, Ala., Little Rock, Ark., and Greensboro, N.C. became synonymous with the fight for civil rights in the 1950s and 1960s, Sugrue said.

In the North, typically, there were no formally adopted Jim Crow laws. Indeed, many northern states had laws going back to the period following the Civil War that forbade discrimination in public accommodation, he said. Nevertheless, racial prejudice and violence against African Americans were similarly systemic, Sugrue said.

For example, opera singer Marian Anderson, although popular and wealthy, could not stay in white-owned hotels.

“She would stay at African American YWCAs that had rooms for black travelers,” he said.

In Pittsburg, black people were assigned times to use the city’s public swimming pools, which generally was the day before it was drained for its weekly cleaning, Sugrue said. This was years before chlorinated pools became the norm, he said.

However, most of the popular films and books about African Americans’ fight for civil rights centers on the South and on events in which Rev. Martin Luther King, Jr. played pivotal roles, such as the Montgomery bus boycott, Sugrue said.

In addition, Sugrue said, the bulk of the civil rights narrative targets a narrow time-frame between the landmark 1954 U.S. Supreme Court education decision in which the practice of segregated schools was deemed unlawful, and culminates with the passage of the Voting Rights Act of 1965, which aimed to prohibit racial discrimination in voting.

“By and large the North does not show up in this analysis until near the end, that is in 1967, 1968 when northern cities erupted in urban uprisings, or the 1970s when African Americans were elected to political offices in substantive numbers for the first time,” Sugrue said. “Or with the rise of the Black Power Movement which sometimes was seen as the problematic counterpoint to the movement lead by the Rev. King in the South.”

To get a better understanding of the country’s history of racial inequality and to measure its progress, the civil rights struggles in the North need to be as thoroughly chronicled and analyzed as the battles in the South, he said.

Sugrue dedicated his talk in memory of Arnold Hirsch, a University of New Orleans history professor for 31 years, whom he called a mentor. Hirsch died in 2018.

Sugrue said Hirsch’s 1983 ground-breaking book, "Making the Second Ghetto," in which Hirsch catalogs the various societal and institutional forces at work ensuring racial segregation in Chicago housing during the decades following World War II, inspired him to conduct further research that resulted in his own book, "Sweet Land of Liberty: The Forgotten Struggle for Civil Rights in the North.”

“It was a book that raised really important questions for me about the politics and society of the urban North and its centrality to questions of race and inequality in modern America, which has been at the core of my scholarly work for the last 30 or so years,” Sugrue said.