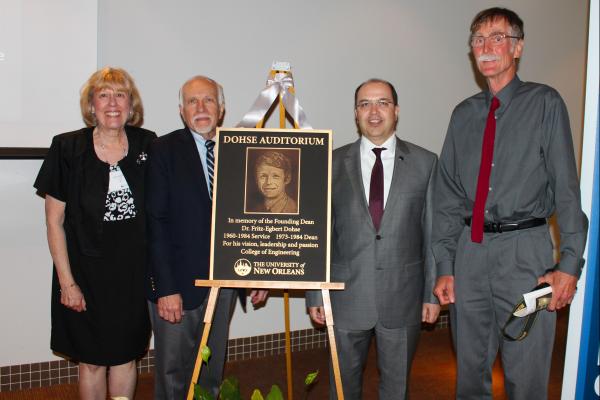 The University of New Orleans’ College of Engineering auditorium now bears the name Dohse Auditorium, in honor of the founding dean of engineering Fritz-Egbert Dohse.

Dohse arrived at the University, when it was known as Louisiana State University in New Orleans, in 1960. He taught courses in statistics, dynamics, mathematics and scientific German.

Throughout his 24-year tenure, the College of Engineering would celebrate major successes that were spearheaded by Dohse including enrollment climbing to over 700 students, the addition of a program in naval architecture and marine engineering, a cooperative degree program with Southern University in New Orleans and Xavier University, and funding for a nine-story engineering building.

Dohse retired in 1984, but not without leaving a mark, not only on the College of Engineering, but also its students. At the dedication ceremony for the Dohse Auditorium on April 11, several alumni along with former colleagues shared their testimonials and fond memories of the founding dean.

Alumna Helen Holzenthal worked with Dohse as an assistant in his office and remembered the unwavering dedication he had to his students.

“His philosophy was that students deserved assistance and guidance and he knew if it weren’t for UNO, many of the students would not be able to earn an engineering degree,” Holzenthal said.

Holzenthal said Dohse’s “door was always open” for any student, faculty or staff member. She recalled one busy day in which constant interruptions were keeping her from her work. She went to Dohse’s office to express her frustrations.

“Dr. Dohse listened patiently and kindly said, ‘Remember that if it weren’t for the students, we wouldn’t be here. We are here to help them succeed,’” Holzenthal said.

Dohse, who died Aug. 12, is survived by his wife, Helga Dohse, and his three sons and their wives: Till and Michele Dohse, Hans and Monika Dohse and Dirk and Renate Dohse.

Till Dohse, who was accompanied at the ceremony by his wife, Michele, said that as a professor of mathematics, he remembers his father saying “Focus on the students’ success.”

Till said it’s good to hear that others remembered his father the same.

Alumnus Pierre Champagne echoed that sentiment saying that Dohse seemed to always have time for others and it wasn’t just about the discipline of education.

“It was not just about getting a job or what it was you wanted to do for the rest of your life, it was about service from a very passionate level of appreciating the talents a person has and how they can use those,” Champagne described.

Champagne said Dohse encouraged him to pursue his studies after the passing of his mother and told him about some internship opportunities, one of them being at a telephone company, where he still works.

“My life has been forever influenced by Dean Dohse,” he said.

Jovanovich said he first met Dohse in 1977 when he visited UNO to see what teaching opportunities were available. There was nothing available until 1980, when he was approached to teach an electrical engineering class for one semester as an adjunct professor. That one semester has turned into Jovanovich teaching at UNO for more than 30 years.

Deborah Settoon, who graduated in civil engineering, remembered first meeting Dohse in a class where she was one of three women in the room. She said he greeted her “warmly and friendly.”

Upon graduation, Settoon said she gave Dohse a tie as a gift and about 20 years later she reached out to him to see how he was. Dohse replied that he still had the tie and still wore it. Settoon said that even though it was a simple gift, she was touched that he remembered so many years later and it was exemplary of how he cared about his students.

“He always had time for us,” Settoon said. “He reminded us to constantly pursue our goals in engineering and he strived to make the engineering school better with constant improvement and constant attention to the students, the detail and the long-term horizon.”

One of Dohse’s goals was to secure a new building for the College of Engineering and was able to do so with the help of alumnus Glenn Scorsone. In 1980, Scorsone was one of about 25 students Dohse asked to lobby legislators in Baton Rouge for a new building. The students were able to get the attention of then-Governor Dave Treen and the Louisiana Legislature would approve funding for the building in 1982. Ground broke on the building two years later, the same year of Dohse’s retirement.

“He was truly inspirational to us because we saw the passion that he had and the trust he had in us as students to go up there and fight for our school,” Scorsone said when telling the story of lobbying for the engineering building.