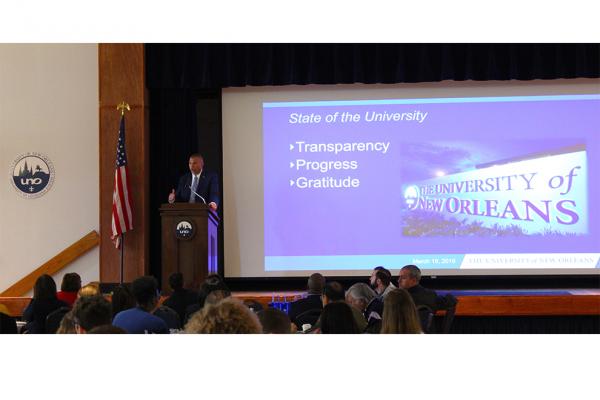 President John Nicklow speaks to University of New Orleans faculty and staff during his biannual state of the university address on Tuesday, March 19.

“Right now we are just about to cross the 5,000 freshman application mark,” Nicklow said. “That’s an increase of 25 percent compared to this same time last year.”

Nicklow, who has made growing student enrollment his main priority, said the number of freshman applications is up 62 percent compared to the same time two years ago and is 92 percent ahead of the same time three years ago.

“Think about that; because of our enrollment team and your efforts, we have nearly doubled the number of students interested in and who applied to our campus in three years,” Nicklow told the faculty and staff who filled the University Center’s ballroom.

In addition, Nicklow said enrollment for the spring semester is up 2.6 percent compared to spring 2018 and that the University’s fall 2018 to spring 2019 retention is up 1.6 percent.

Nicklow said a lot of the application growth is coming from out-of-state-students, particularly from Mississippi, Alabama, Florida and Texas.

“We believe that’s in large part due to the Gulf State Promise, which offers in-state tuition to students from the Gulf states,” Nicklow said.

Spikes in applications from California, Colorado, Illinois and New York are attributed to the University’s outreach, paired with digital advertising and traditional print mailers in those same areas.

“Based on these increases it is fair to say that the University of New Orleans is building its out-of-state name recognition and improving national perceptions about the institution,” Nicklow said.

Applications from local students are also on the rise, Nicklow said, as the University continues to target them as well in recruiting.

On the research front, Nicklow said the University’s commitment to supporting faculty research remains strong. He used a chart to illustrate the upward trajectory of the University’s grant and contract expenditures.

“In fiscal year 2016, we were at $19.3 million. That figure has climbed to $23 million and then $31.5 last fiscal year, and it is projected to exceed the $32 million mark in the current fiscal year,” Nicklow said. “We have a ways to go, but that is terrific progress and I think it shows our renewed commitment to expanding our research portfolio and supporting our faculty researchers.”

Nicklow also unveiled three new initiatives that he says will help the University to capitalize on the momentum that is the result of stable enrollment and finances. The three-prong plan, which Nicklow said will “directly determine our ability to reach our aspirations as an institution” includes:

•    A new 10-year strategic plan that will be completed by the end of the year that Nicklow said would be the University’s institutional effectiveness plan. The document will be used to chart progress as milestones and objectives are reached.

•    A master plan for campus building and facilities. A campus-wide space survey is currently underway and is expected to be completed by this summer, which is a critical piece of the process. The plan will provide a vision for supporting the university’s growth, with a focus on the physical campus, in alignment with the strategic plan, Nicklow said.

•    A future comprehensive campaign to build on the past success of fundraising initiatives that have increased money available for such programs as student scholarships and support. The UNO Foundation has engaged with a fundraising consulting firm that will help guide efforts.

“We have built genuine momentum . . . So the question is: what do we do with this momentum?” Nicklow asked. “I think we need to channel it into a bold new vision for the University with ambitious plans for the future because that is what our students deserve and that is what the city of New Orleans needs.

“The three components that I mentioned, a strategic plan, a master plan, and our comprehensive campaign, together, truly represent a roadmap for that transformative vision.”