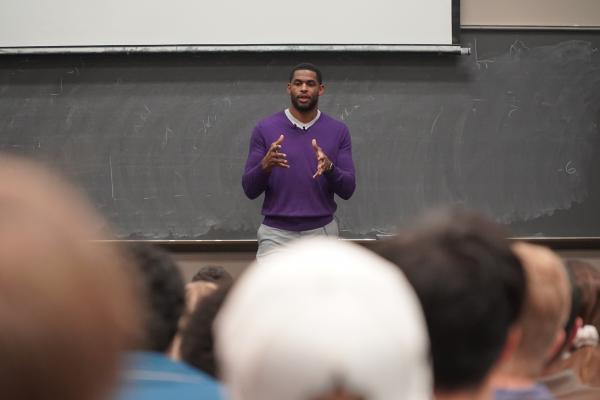 Former New Orleans Saints star receiver Marques Colston has a philosophy that he calls “irrational confidence” that has propelled his success on the football field and in boardrooms across the country. It is the belief that if you put in the hard work and preparation, you can achieve success despite the odds, Colston said during a speech at the University of New Orleans.

“Don’t be afraid to fail,” Colston said as he recalled a very “public and painful” moment of dropping a pass in front of 70,000 football fans.

“They will let you know that you messed up!” Colston said.

However, the former NFL star said he also has a Super Bowl ring, remains the Saints all-time leader in receptions and total touchdowns, and has a business degree that’s allowed him to transfer some of his gridiron skills into the business world.

Colston gave the keynote address on Thursday as part of the University of New Orleans Management Week, which features visits by business leaders from across the region to classes in the College of Business Administration to share their stories and insights with students.

“Failures are only failures if you allow them to be,” Colston told a packed auditorium filled with students. “Being able to translate very public failures  . . . and move forward is a key aspect of entrepreneurship and management.”

Statistically speaking, Colston, who was a seventh-round draft pick from off-the football-radar Hofstra University, wasn’t supposed to have a professional football career, he said.

“As a seventh-round pick you’ve got maybe a 3 or 4 percent chance of becoming a starter at some point in your career, and even when you do make the team your staying power is 3 ½ years,” he said. “For me to be a day-one starter and stay 10 years and win a Super Bowl on top of that, none of that was supposed to happen. I’m not supposed to be here.”

His “irrational confidence” bespoke another reality, he said. One in which he flipped the script and wrote his own success story. That same philosophy translates into the way he handles his business ventures, he said.

“Understanding that if there’s a 1 percent chance that’s somebody’s going to make it—you’re the 1 percent,” Colston said. “And the way you become that 1 percent is your approach, your work ethic and literally getting yourself in a position where there’s nobody in the world that’s going to outwork you and take what’s yours. You plant your flag early on.”

Colston, who retired from professional football in 2015 after 10 years with the Saints, also talked about the business failure of four of his companies, and how that led him to create other better companies that were more sustainable.

“Position yourself to learn from your failures,” he said. “It’s going to happen, more than once and that’s OK.”

Colston’s topic, “Striking a Balance: Life as a Serial Operator,” explored the different roles he plays in a number of his varied business ventures that are located all over the country.

Colston is the founder and managing partner of Dynasty Innovation, a strategy and execution firm focused on marketing, branding, sports and education. He also is a partner at Timeless Herbal Care, a Jamaica-based cannabis company focused on all aspects of the international medical cannabis industry.

He is the managing director for the Center for Innovation at Virtua Health systems, and also serves on the advisory board for the One Team Collective, a sports technology accelerator run by the National Football League Players Association.

As a business owner, investor and digital strategist, Colston touts himself as a leading growth entrepreneur “at the intersection of sports, technology and digital media.”

One of those business ventures is Main Squeeze Juice Co., a New Orleans-based fast-casual juice and smoothie bar that has several franchise locations. Colston and his wife Emily, who is an alumna of UNO, are partners in the venture. Colston is director of business development.

“I knew nothing except that I like to consume them,” Colston joked, before explaining how he researched the industry and the company and developed a relationship with the juice company’s executives before deciding to invest.

Something he’s learned as a businessman is understanding what he brings to the table, and knowing how to “expand his lane,” while not overextending himself by taking on roles better suited to other business partners or associates, Colston said.