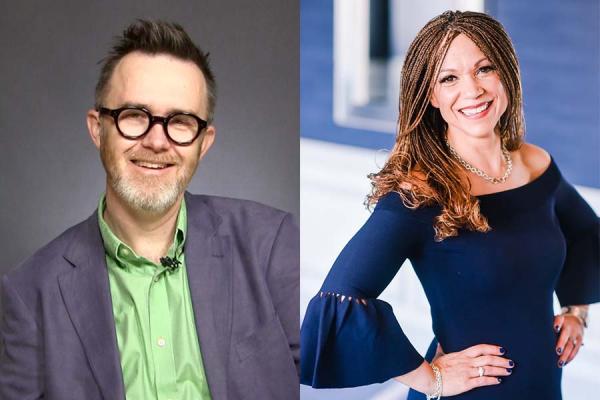 Rod Dreher (left) and Melissa Harris-Perry will visit the University of New Orleans March 14 for a discussion about the future of political discourse.

The University of New Orleans Honors Program will host two distinguished guests for the next event in its spring 2019 lecture series. Melissa Harris-Perry, political commentator and political science professor at Wake Forest University, and Rod Dreher, New York Times best-selling author of “The Benedict Option,” will share their perspectives on the future of political discourse when they visit the Homer L. Hitt Alumni and Visitor Center Thursday, March 14. The talk begins at 6 p.m. and is made possible by support from the Student Government Association, the Tocqueville Project and The American Conservative magazine. It is free and open to the public.

“We are proud to bring guests of this caliber into a public forum for a timely discussion about the nature of American political communication and where it is headed during this era of divided government,” said Chris Surprenant, associate professor of philosophy and director of the Honors Program. “Preparing students to participate confidently and effectively in our national political conversation is a key objective in higher education, and a foundational discussion like this one involving thoughtful leaders from different perspectives can spark interest and encourage students to engage on political issues they find meaningful,” he added.

Melissa Harris-Perry is the Maya Angelou Presidential Chair at Wake Forest University and the founding director of the Anna Julia Cooper Center, a curricular hub for courses addressing intersectional identities, cultivation of undergraduate mentoring and marshalling of resources on behalf of neglected subjects and communities. She also serves as editor-at-Large for ELLE.com and hosted her own eponymous weekend morning broadcast on MSNBC from 2012-2016. She is the author of the award-winning “Barbershops, Bibles, and BET: Everyday Talk and Black Political Thought, and Sister Citizen: Shame, Stereotypes, and Black Women in America.” Harris-Perry received her B.A. in English from Wake Forest University and her Ph.D. in political science from Duke University. She also studied theology at Union Theological Seminary in New York. She has previously served on the faculty of the University of Chicago, Princeton and Tulane University.

Rod Dreher is senior editor and blogger at The American Conservative. He has a degree in journalism from Louisiana State University and lives in St. Francisville, La. His 2017 book, “The Benedict Option: A Strategy for Christians in a Post-Christian Nation,” calls on American Christians to follow the example of St. Benedict of Nursia, often thought of as the founder of western monasticism. A Benedict approach, according to Dreher’s strategy, encourages Christians to embrace ancient practices in order to preserve and protect their faith and way of life through a coming Dark Age, evidenced by increased secularization and the decline of the church’s influence. According to Amazon.com, “‘The Benedict Option’ shows believers how to build the resistance and resilience to face a hostile modern world with the confidence and fervor of the early church. Christians face a time of choosing, with the fate of Christianity in Western civilization hanging in the balance.”