The Krewe of UNO Rolled Through the Lakefront Campus Tuesday 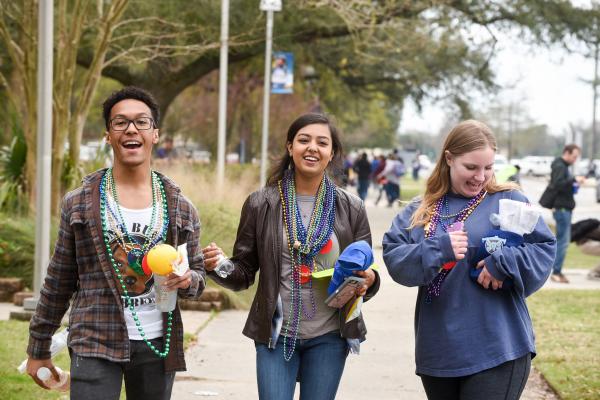 The Krewe of UNO rolled through campus on Tuesday, Feb. 26, with plenty of Mardi Gras beads and trinkets.

They walked, they rode, and yes, they “floated” as the Krewe of UNO rolled through the University of New Orleans campus on Tuesday, celebrating its 2019 theme of “Hollywood on Parade.” Parade-goers were treated to a healthy dash of Privateer-flavored throws that included swords, silver and blue beads, cups, balls and T-shirts.

Indeed, President John Nicklow and Stacy Nicklow led the processional of nearly 30 organizations while tossing beads and cups from atop a privateer ship.

Marching bands from Sophie B. Wright Charter School and Morris Jeff Community school provided the soulful live beats as the parade, which started at 12:30 p.m. from The Cove, wound through campus to the University Center with nary a drop of rain that had been projected for that afternoon.

Instead, sunlight poured through the clouds. Blue-wigged “UNO-ettes” from Student Affairs shook their pompons. Other colorfully attired students, faculty and staff tossed trinkets from pick-up trucks, flat beds and even a boat.

“Our team checked the weather constantly. We even tweeted (WDSU-TV Chief Meteorologist) Margaret Orr, who tweeted right back to us,” said Reagan Laiche, manager of operations in the Office of Student Affairs who headed the committee that organized the parade. “It was an anxious night and morning to say the least, but it turned out perfectly!”

Even the Interdisciplinary Studies mascots, Cap’n Horace and First Mate Rose, pulled up chairs and were rewarded with a haul of beads that draped their skeletal frames.

Meanwhile, the more lively revelers were treated to Monster energy drinks from the Monster Truck and the dance skills of Capt. BrUNO, the Privateers’ beloved mascot, who was seen “dabbing” along the parade route when he was not tossing beads or T-shirts.

And in the spirit of the Mardi Gras season, the parade culminated with a king cake party at the University Center. The Louisiana Office of Tourism also was on hand with a green screen photo booth to capture the memory of day, and to hand out free T-shirts. 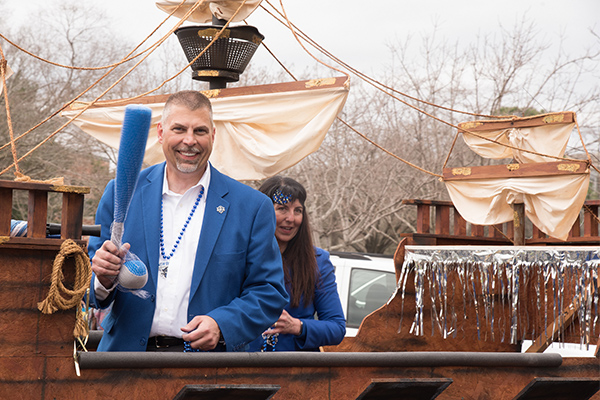 “This year’s parade was fantastic,” Laiche said. “The amount of work it takes to plan the parade involves several campus and community partners. I’m never disappointed by their commitment to making this parade fun for those who watch and for those who participate.”

Laiche said she was especially grateful to Marco Perez, general manager of the UNO Lakefront Arena, for his work arranging the line-up of the parade, the Office of Student Involvement and Leadership for support in the parade planning process, and who made their parade debut as the “UNO-ettes,” the UNO Police Department, Sodexo and campus food-service provider Aramark for the king cake, among others.

The parade, she said, is designed to build “community across campus.”

“Students, faculty and staff are all invited to roll with us,” Laiche said. 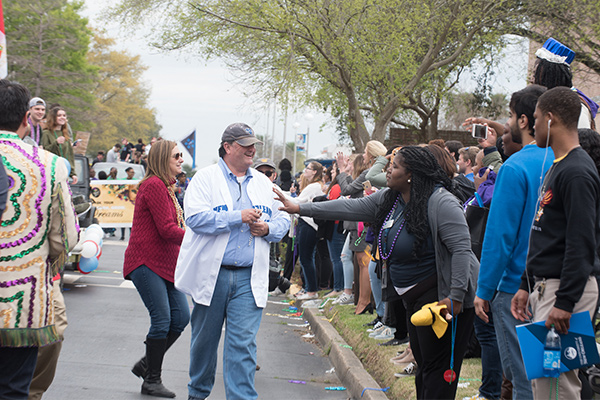