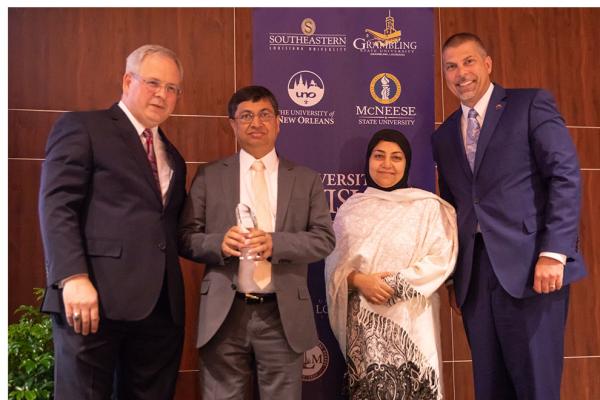 During his 29-year career at UNO, Hassan, who is the Hibernia Professor of Economics and Finance and Bank One Professor of Business, has earned numerous awards, including the prestigious IDB Prize in Islamic Banking and Finance in 2016 from the Islamic Development Bank, the development bank of the Muslim world.

Last year, Hassan was named the 2018 Academy of Economics and Finance Research Fellow at the group's annual meeting. Each year, the academy membership votes to select one fellow whose sustained contributions toward research merit recognition.

In nominating Hassan for the faculty award, Olof Lundberg, senior associate dean in the College of Business Administration, noted Hassan's numerous awards and accomplishments, and said he takes his duties as an educator just as seriously as his duties as a researcher.

As a mentor, he has chaired 50 successful dissertations and sat on the committee of another 21, and is a shining example of the impact a dedicated faculty member can have on both their field and their students.

“He is gracious and approachable as a professor, and his classrooms are fertile grounds for lucid and informative lectures as well as productive, collaborative debate,” Lundberg wrote. “Students seek him out time and again, and he remains exceedingly generous with his time and efforts.”

Hassan is a researcher, educator, mentor and advocate for empirical research in economics and finance. His areas of expertise include financial institutions and markets, emerging markets and financial development, international finance, corporate finance and Islamic finance.

He is the chief editor of two scholarly journals focused on Islamic and Middle Eastern finance and guest editor for several other publications. He has presented more than 350 research papers at professional conferences around the world and has had more than 200 papers published in academic journals.

“Preparing students for success after graduation means placing them in the right position where they can fully realize their potential,” Lundberg wrote. “Dr. Hassan understands this and uses his extensive international network to help his students obtain promising initial post-graduate positions.”

The faculty award, along with the staff member of the year award, was given at the culmination of conference.

The 2019 For Our Future conference attracted more than 450 faculty and staff from the system's nine universities for professional development and collaboration.