Novelist and UNO alum Maurice Ruffin is taking the literary world by storm with his debut novel "We Cast a Shadow." Ruffin was photographed at The Orange Couch in New Orleans, one of his favorite spots.

A gauzy haze bathes the area, perhaps the creation of the bright stage lights meshing with the dark room at The Ace Hotel. Maurice Ruffin, dressed in black, is holding court center stage, preparing to read an excerpt from his debut novel “We Cast a Shadow.”

A standing-room-only crowd has packed the lower room and the upstairs balcony, prompting Ruffin to joke that contrary to what must have been advertised, there would be no “free money.”

He turns serious, thanking the crowd and his family for their show of support. It has been a long journey. He started writing the book seven years ago.

“Seeing y’all here is very important to me, because when I started I didn’t know if I would finish the book,” Ruffin says. “All I can say is that community helped me do this, there are so many people in this room right now who have pulled me over the finish line.”

It has been quite a finish but, perhaps, only the beginning.

The superlatives are flying from coast to coast and all points in between about the University of New Orleans double alumnus and his first novel. Ruffin, who earned a bachelor’s degree in English and a Master of Fine Arts from the University’s Creative Writing Workshop (CWW), is being touted as a rising literary star and a “writer to watch.”

He was among 32 writers featured last fall by the The New York Times in an article about impactful literature created by African-American men. Fellow UNO alumnus Jericho Brown also was featured in the article.

Ruffin’s novel, released Jan. 29 by One World/Random House, has been characterized as a “must-read” on various book lists, including reviews by The Los Angeles Times, Publishers Weekly and Cosmopolitan magazine.

“I’m humbled,” Ruffin says regarding the media attention his novel has drawn. “I worked on the book for years and only a small circle of friends knew anything about it. Now, I’m seeing positive reviews from NPR and The Boston Globe! It’s a true blessing!”

Ruffin’s popularity from the buzz that his novel has generated is increasingly apparent. Walking down Chartres Street one February afternoon, he is accosted by the words of a passer-by.

“Congratulations! I can’t wait to read your book,” the man says as he passes.
Ruffin, pleasantly startled and a bit bemused, stops walking and sticks out his hand.

They both laugh as the man shakes Ruffin’s hand and introduces himself as well before continuing down the sidewalk.

Ruffin, an attorney with the Social Security Administration, is married and lives in New Orleans, where he was born and raised. He calls his wife, Tanzanika, “the executive producer of my entire life.” She also is an attorney and the two started dating in high school.

“I couldn’t have accomplished any of this without her,” Ruffin says.

He started writing as a youngster, and Ruffin feels fortunate to have people around him who encouraged him to pursue his writing. Growing up in New Orleans East, he chose to attend the University of New Orleans because it’s “home,” he says.

“I’m from here, my family is here,” Ruffin says. “I’ve lived here my whole life and whenever I wanted to advance myself and gain new skills I just looked right across the city and said, ‘That’s my spot, I’ll go there.’”

After earning a law degree, a fellow writer encouraged him to apply to UNO’s Creative Writing Workshop program.

During the book signing, Ruffin shares his writing insecurities and how then-CWW director Rick Barton responded.

“I told him I was an amateur, I don’t have any previous writing degrees,” Ruffin recalls. “He told me ‘We’re going to accelerate you by 10 years.’ And sure enough, by the time I got to the next director, I was like ‘Neal, I’m sorry, I’m a better writer than you!’”

The Book
Ruffin’s novel is set in an unnamed southern city about 50 years in the future where walls separate the rich and the poor and police violence against people of color is a common occurrence. Ruffin says New Orleans “informs the setting,” and readers will recognize some familiar sights.

Like the city, the narrator’s name is not given. “My name doesn’t matter,” is the opening sentence in a novel some reviewers have compared to Ralph Ellison’s “Invisible Man.”

In simple terms, Ruffin says the novel is “a story about a family.” However, the novel’s themes of love and racism, of social conditioning and stereotypes, add layers of provocative complexity.

The narrator father is an African-American attorney who is trying to protect his biracial son from the dangers that many young black men face in America, Ruffin says.

“He wants to protect his son from racism. He wants to save his son so that he can have the same opportunity as any other American . . . His son is very light-skinned and he’s sort of pushing his son to pass as white. The son is resisting it and the mother can’t quite understand why the dad is so insistent,” Ruffin explains.

The son has a very dark birthmark on his face that’s getting bigger as he gets older, which adds a sense of urgency. The father wants the birthmark removed via a skin lightening or demelanization process that would in effect allow his son to look more white and less like a target for a hate crime.

The novel is an outgrowth of news stories that were prevalent several years ago, Ruffin says. Such stories included the murder of Trayvon Martin, an unarmed black Florida teenager who was shot and killed by a neighborhood watch captain; the racially tinged political struggles of President Barack Obama and several high-profile police-involved fatal shootings of unarmed black people, he says.

The job of a writer is to reflect what he sees, Ruffin says. Writing “We Cast a Shadow,” was his way of processing some of those events, he says.

“I was trying to understand what I was seeing on television, the internet and in real life. Why were people being incarcerated, beaten or killed mainly because of their skin color,” he says.

For his readers, Ruffin says he’d like them to read the book with an open mind.

“I want them to understand that most of the easy answers we get from politicians and media personalities are not answers. I hope readers come to understand that they should educate themselves on the history of racism in America and dig deeper than the typical stories we repeatedly hear,” he said. “Mostly, I hope they share the book with their loved ones and have conversations about the book!”

The Call
When Ruffin began writing, “We Cast a Shadow,” he had three goals: Finish the book, be proud of it and get it published.

He finished writing the book in 2016 and was proud of it. In early 2017, while shopping in Walmart with his mother, he received a phone call from his literary agent: You are wanted in New York.

That trip to meet with publishers secured that final goal.

“Trying to publish a book is one of the most difficult things a writer can do,” Ruffin says. “There are hundreds of thousands of talented people just trying to get their book in the world.”

He met with four publishers; the last meeting was with One World.

“The second I met Victory, I said this person understood what I was trying to do,” Ruffin said regarding his book editor Victory Matsui. 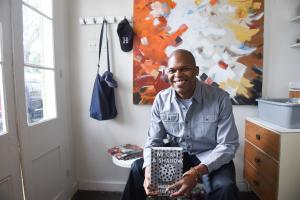 For nearly two years, Ruffin and Matsui worked to polish the book, including cutting some 15,000 words.

“The first time she said cut a chapter, I was like “Cut a chapter? Are you crazy, that was a six-month chapter!’”  Ruffin recalls with a laugh.

He appreciates the constructive criticism, and calls Matsui “a genius.”

“Every cut was the right cut. The book is better because of the cuts that Victory made,” Ruffin says.

Ruffin also credits his “writing tribe” for helping bring the book to fruition. He and fellow UNO writing workshop alumnus Tad Bartlett, started the Peauxdunque Writers Alliance more than a decade ago.

He urges all writers—neophytes and professionals—to find a supportive writing community.

And, never give up on yourself, Ruffin says.

“You have to walk on faith,” he says. “It doesn’t matter how dark the path seems . . . keep walking that path, you’re going to find someone who is going to want to hold your hand, hold a flashlight and say, ‘I got you, come on.’ So, don’t ever, ever give up.”