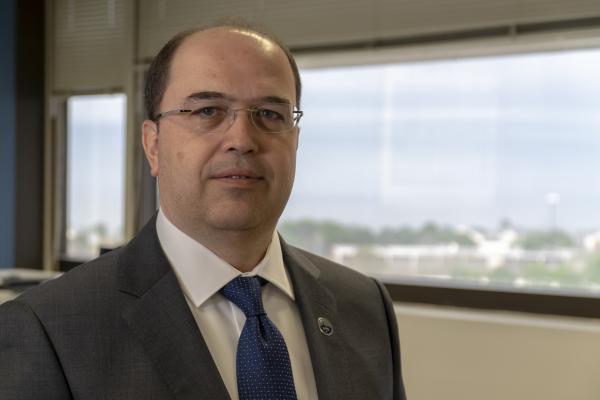 Taskin Kocak, the new dean of the College of Engineering, embraces an education philosophy that includes practical work experience and equipping future engineers with soft skills such as leadership, communications and team building.

“I believe in working and education at the same time because it gives you practicality and experience, even before you finish your degree,” said Kocak who worked at Mitsubishi Electric Semiconductor in  Raleigh-Durham, N.C. while pursuing his degrees.

Kocak, who joined the University of New Orleans on Jan. 14, succeeds civil and environmental engineering professor Norma Jean Mattei, who served as the interim dean.

Kocak said he wants to explore the creation of study abroad engineering programs to offer students a “global experience.” He established such programs in Germany, Italy and Hong Kong while at Bahcesehir University in Istanbul, Turkey.

Prior to coming to UNO, Kocak, who was born and raised in Turkey, spent eight years as a professor, department chair and dean of the College of Engineering and Natural Sciences at Bahcesehir University. He holds a doctorate in electrical and computer engineering from Duke University and has previously worked at Duke, the University of Bristol in England and the University of Central Florida.

Kocak says he avidly consumes current affairs news about the U.S., Turkey and England, a byproduct of his working in those countries.

“My wife tells me ‘Normal people don’t do that! What are you going to do with all that?’” Kocak said with a laugh. “I’m a news junkie.”

He also likes computers, which is what first attracted him to engineering and an eventual master’s degree in electrical and computer engineering.

As he settles into his new role at the University, Kocak says he wants to ensure that students have the opportunity for internships both foreign and domestic. In addition, Kocak wants to explore partnerships with local companies that will allow industry leaders to share their expertise with students, possibly as adjunct faculty members or through new elective courses.

“I think we have a lot of different manufacturing and others, like information technology companies, moving into the New Orleans area, so I think there’s a great chance to partner with them because they will need the workforce.”

The industry partnerships is part of what Kocak lists under his “enhance undergraduate experience” goal, one of four overall goals he presented to the University community as part of his interview for the position. His other focus points for UNO are to grow graduate and research programs, develop faculty and to engage the community and industry, he said.

He’s quick to add that it was not one single factor that helped BAU’s engineering department to experience a 30 percent growth in student enrollment during his eight-year tenure. The strategy also included the offering of new programs, hiring more research-capable faculty and increasing recruitment efforts and marketing, particularly at high schools.

“You have to visit high schools,” Kocak said.

Kocak said he will create a five-year plan that includes end goals of increasing the college’s national ranking, increasing student enrollment by 50 percent, increasing research funding by 100 percent and increasing faculty hires by 50 percent. Kocak said faculty mentoring would play a key role in those goals.

“The College of Engineering has a lot of potential,” said Kocak, noting that the college ranks within the top 200 in the country. “Based on this potential, I think we can develop this college further.”