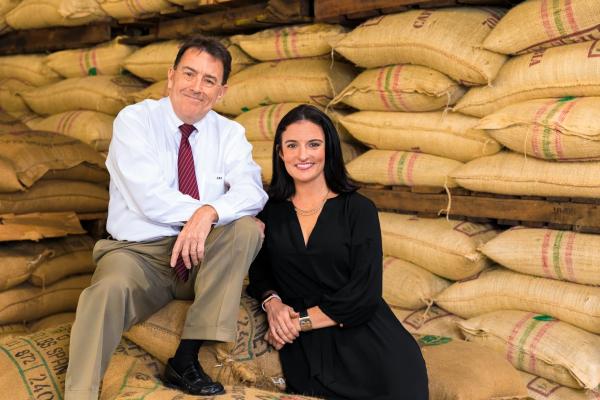 Allan Colley, president of Dupuy Storage and Forwarding, LLC, and his daughter Janet Colley Morse, who is vice president.

As a child, Allan Colley played among the towering stacks of coffee sacks that were piled along the wharf and later moved into his grandfather’s warehouse located along the New Orleans waterfront. The bags, filled with imported green coffee beans from far-away countries, crowded the platform, Colley recalled.

“All coffee in those days came in on the riverfront,” he said. “There used to be these huge wharves, and as far as the eye could see you would see coffee.”

Colley is president of Dupuy Storage and Forwarding, LLC, a position he has held for 34 years. His family has been a fixture in the coffee import business since his maternal grandfather, John Dupuy, founded Dupuy Storage in 1936.

After returning home from fighting in World War I, Dupuy started importing coffee, which required frequent visits to Brazil, Colley said. About 15 years later, he turned to the storage industry, Colley said.

Dupuy, who was orphaned at a young age, was self-educated and loved to read, Colley said.

His grandfather, whom he never met, indirectly influenced his love of liberal arts via his mother who always praised the well-rounded nature of a liberal arts education, said Colley, who earned a bachelor’s degree in philosophy from the University of New Orleans in 1971.

“She always said a good liberal arts education would serve anybody well. I took that to heart,” he said. “When I reflect on it now, I think it was a good push, it’s natural for me and where I’m comfortable and I think it’s served me very well in business. I have wonderful people who help me with accounting, and engineering and legal things, and that’s their role. I like to think that my liberal arts education helps me in being more creative.”

The bags of coffee are now shipped in containers, instead of packed loose in cargo holds, and are no longer unloaded at the riverfront, Colley said. Instead, the containers of bags are trucked to the company’s warehouses now located on Jourdan Road in New Orleans.

And while the company still transports tons of coffee beans elsewhere, plenty of the beans from Dupuy’s warehouses remain in the metro New Orleans area, and find their way into the many cups of coffee served in local cafes and restaurants.

“New Orleans is a major roasting point for coffee, a lot of coffee is produced here by customers we all know of, like Folgers, Reily Foods, Community,” Colley said. “And small roasters, there’s a bunch.”

Since its founding, the company known also as The Dupuy Group, has branched into other “value-added services,” Colley said and has expanded its storage and import business from New Orleans to several other port cities, including Houston and Charleston, South Carolina.

“We are a regional company with a national reputation,” Colley said. “We basically serve the Southeast, but are certainly known nationally. And I’m very proud of that. We do business with people all over the world who are in the coffee business.”

The company responded to customers by increasing its capacity to handle a variety of commodities and adding ultra-clean, modern facilities that service the ports of Charleston, Houston and Jacksonville, Fla., as well as New Orleans. It also offers services such as including bulk handling, blending and export consolidation.

“Coffee is big business, not just here in New Orleans but in other parts of the country,” Colley said. “We used our experience and reputation to allow us to expand in places where we haven’t done business before.”

Colley, who has funded two professorships at the University of New Orleans named in honor of his grandfather and his mother, Janet Dupuy Colley, describes his alma mater as a “beacon.”