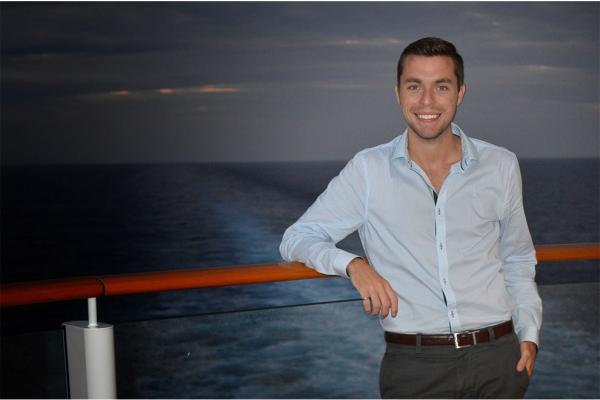 Alum Justin Champion sailing in the Caribbean on board the “Norwegian Getaway” from Miami to Jamaica.

University of New Orleans graduate Justin Champion’s career has him sailing through life and around the globe. Champion, who earned a bachelor’s degree in naval architecture and marine engineering in 2012, is a project manager for Foreship, LLC and is responsible for designing and overseeing multi-million dollar renovations of popular cruise ships.

His career has taken him around Europe, the Middle East and the Caribbean, among other places.

“I’m enjoying it, definitely!” Champion, 28, said of his travel-centric career.

Foreship is a privately owned naval architecture and marine engineering company that specializes in building and remodeling cruise ships. Its main office is in Helsinki, Finland, which is where Champion landed just three months after graduating from UNO. His acceptance into the company’s training program, which included a part-time job while pursuing a master’s degree, came via email the morning of his graduation, Champion said.

“With Foreship I worked part-time and then on the side I was getting a master’s degree in naval architecture,” he said. “They funded my master’s degree and the whole time I was working with them, so it was an awesome opportunity.”

After completing the two-year program, Champion was hired full-time as a project engineer. In 2017, he was promoted to a project manager. His work is exclusively with cruise ship design, focusing on ships that are being renovated, Champion said. Many of his projects have involved Royal Caribbean Cruise Ships, he said.

“It’s my job to prepare drawings for the cruise line and travel to the cruise ships to ensure that everything is built as it should be,” Champion said.

One of his first projects for the company was helping with a redesign of the “Oasis of the Seas,” one of the world’s largest ships, he said.

“I got to spend a month on board of that ship; I got to learn a lot,” Champion said. “We sailed from Miami to Spain, and then I stayed a month on the ship in Spain to watch the transformation.”

Champion recently moved to Seattle from Finland as part of a team tasked with opening a new office there. He had lived in Europe since his graduation.

“I’d never been to Europe before in my life; the first time was on my flight there,” Champion said.

Now, traveling around the country has become second nature. Every design project he works on requires an onsite visit. His team typically starts design work about a year before the actual renovation or building starts, Champion said.

In January, he will travel to the Bahamas to oversee a $115 million project, and expects to spend nearly two months aboard the dry-docked vessel.

“That’s why I love what I do because I spend a lot of time on the design and then I get to see it be built,” he said. “So I’m always traveling to the ship to watch what I design get built.”

Champion grew up in North Carolina around the Great Smoky Mountains. A family cruise out of New Orleans when he was 5-years-old sparked an interest in cruise ships that never crested, he said.

In high school, he told his friends he was going to school in New Orleans to pursue a shipbuilding career. They laughed.

“They kind of made fun of me,” Champion said. “They would joke, ‘What are you expecting to do? Design cruise ships one day?’”

Champion got the last laugh when he recently attended his 10-year high school reunion.

“They couldn’t believe I ended up doing that!”

Champion said the University of New Orleans was his first choice for college because of the strong naval architecture and marine engineering program and its “value for money.”

“UNO prepared me extremely well. The NAME program was comprehensive and hands-on,” he said. “Even though I chose a career in a very specific field (cruise industry), all of the basics were covered so that I had a smooth transition from school to employment.”

Extracurricular activities and student leadership positions, such as being a UNO Ambassador, equipped him with additional professional and social skills valued by his employer, Champion said.

“I think it is important to use your time at UNO for more than educational development,” he said. “As someone who is now hiring new employees for our new office in Seattle, I can attest that social and leadership skills are equally if not more important than a GPA. Especially in a surrounding like mine, teamwork is everything.”

Editor’s note: If you know a UNO grad who is doing interesting things, send an email to pr@uno.edu with the subject line “Alumni Spotlight.”