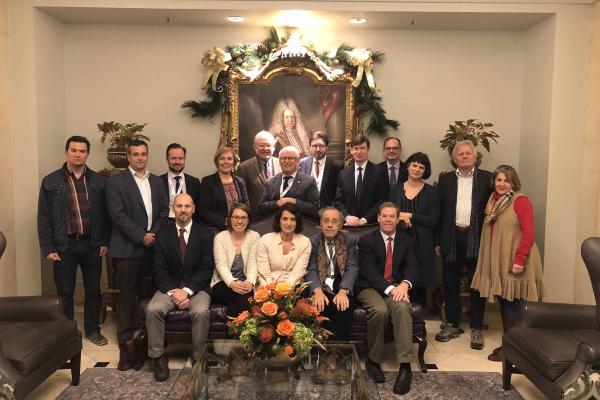 A summit of diplomatic, scholarly and advocacy organizations focused on cultural and academic exchanges between the U.S. and Austria convened at the Ritz-Carlton in New Orleans Nov. 12-13 to explore opportunities for joining forces in areas of mutual inte

A summit of diplomatic, scholarly and advocacy organizations focused on cultural and academic exchanges between the U.S. and Austria convened at the Ritz-Carlton in New Orleans Nov. 12-13 to explore opportunities for joining forces in areas of mutual interest and benefit. The summit was sponsored by the Botstiber Institute of Austrian-American Studies and organized by Center Austria: The Austrian Marshall Plan Center for European Studies, which is housed at the University of New Orleans.

“We were pleased to be able to welcome friends and partners from around the world to our beloved city,” said Günter Bischof, director of Center Austria at the University of New Orleans. “The summit informed and galvanized a number of existing partnerships and sparked exciting ideas for new collaborations in the future.”

Representatives from more than a dozen organizations participated, discussing issues such as the status of Austrian studies in the U.S. and American studies in Austria, fundraising challenges and the role of social media in advancing their causes. They also considered how they might identify synergies and achieve more effective communication with common constituencies.

Other attendees included representatives from professional organizations like the Austrian Association for American Studies and the Austrian Studies Association in the U.S., as well as diplomatic players in the culture field such as the Austrian Cultural Fora in New York and Washington as well as the public affairs office of the U.S. Embassy in Vienna. Philipp Lorio, Honorary Consul of Austria for Louisiana and Mississippi, also attended.

The summit schedule built in time for visitors to take a break from panel discussions and enjoy a walking tour of the French Quarter, a visit to the National WWII Museum, and cocktails and dinner at legendary New Orleans restaurant Brennan’s.

Center Austria promotes the communication and extension of Austrian and Central European culture through scholarly and artistic activities and academic partnerships. Launched in 1997, Center Austria is based on more than three decades of cooperation with the University of Innsbruck and a sister-city agreement between the cities of Innsbruck and New Orleans.