NEXT UP, MEDICAL SCHOOL 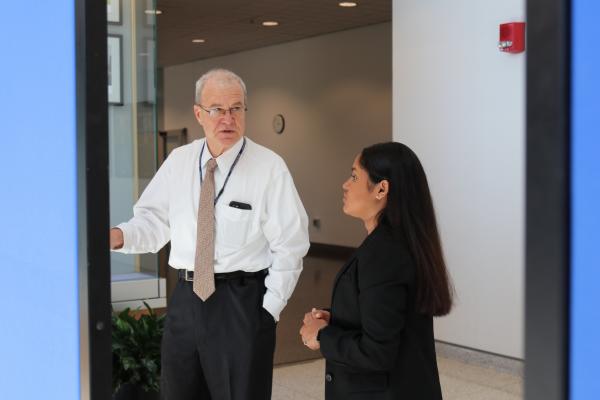 University of New Orleans student Dayana Frazer says the University has helped her lay the groundwork for a career in medicine. She spent part of her summer at the UMass Medical School working with UNO alum Dr. Terence Flotte, the medical school dean.

Dayana Frazer, a senior at the University of New Orleans, could very well be “focus” personified. The biology major, who counts studying among the ways she de-stresses, will graduate in May and currently has nearly a 4.0 grade point average.

“I really love school, I like learning,” Frazer said. “So, that’s my idea of relaxing.”

Following a gap year spent working in a research lab, Frazer’s next major focus will be medical school. She’s leaning toward an M.D./Ph.D. program.

“Dayana is an incredibly smart person who is driven to succeed,” says Steve Johnson, dean of the College of Sciences. “She is very passionate about her classwork as well as her research.”

Johnson met Frazer during her sophomore year when she enrolled in his course, Population Genetics, Ecology, and Evolution. Her studious nature later prompted him to write a recommendation letter for a summer research internship in which he noted her academic drive and accomplishments—including her high grade point average. “She received an A in the course and was in the top 5 percent of students in this very difficult biology course. In both lecture and lab, Dayana was extremely dedicated to her work,” Johnson wrote. “She is a very intelligent student with a strong work ethic.”

While acknowledging compliments for her achievements, Frazer also self-consciously shrugs them off. As the first in her immediate family to graduate high school and now college, being focused is a driving force; failure is just not an option.

“My mom is really excited,” Frazer said. “She’s worked hard her entire life to give me a better life.”

When Frazer was 3-years-old, her mother moved to the United States from Honduras, leaving Frazer to be raised by her grandmother for nearly a decade. Frazer, who grew up in Honduras, joined her mother in the U.S. when she was 12.

The transition wasn’t an easy one, Frazer said.

“I did go to a bilingual school (in Honduras) so I learned English, but I never really spoke it,” Frazer said. “I didn’t have anybody to speak it with, and coming here it was like ‘Oh, I really have to do this now.’”

Frazer learned to speak English fluently and she and her mother became naturalized citizens last year.

“She pushed me to do the citizenship and we both became citizens the same day,” Frazer said. “It wasn’t really hard for me because I learned (civics) in school; it was harder for my mom.”

Frazer speaks about her path to UNO and her aspirations with such determination that it seems nearly every high school student could benefit from hearing her tell it.

Her focus is research-based. In her sophomore year at Archbishop Chapelle High School in Metairie, her interest in science was piqued by a biology course. She explored that interest more when given the choice of taking Biology II versus chemistry or another science.

Before starting college, she shadowed a physician to get a feel for whether a career in medicine would suit her, Frazer said.

“I took Biology II, which was like anatomy and physiology, and based on that I thought, ‘I really want to do biology as my major,’” she said. “And to really confirm it I spent like a month at LSU Health Sciences Center shadowing a doctor … and that helped me to really know that science it what I really want to do.”

“I come from a country where women are not really taught much about sexual education; they either end up with some disease or end up pregnant really young and in a bad situation,” Frazer said. “So I really wanted to see what OB-GYNs do.”

The career shadowing experience fueled a compassion to be able to help people, Frazer said. As a student at UNO, she’s spent summers in medical labs conducting research and further laying a foundation for a future medical career. Frazer was one of five UNO undergraduates chosen for a summer research internship at Ochsner Medical Center in 2017.

During the six-week program, the students engaged in work that sought to understand more about liver cancer recurrence, to improve care for babies and children with pulmonary health concerns and to help develop successful cancer therapies that would perform in a patient who has developed drug resistance.

This year, Frazer participated in a summer undergraduate research program at the University of Massachusetts Medical School. She was one of 29 high-achieving students chosen from across the country to attend the 10-week mentored laboratory clinical research program. Frazer worked in the gene therapy lab of University of New Orleans alum Dr. Terence Flotte, the dean of the UMass Medical School.

Frazer said her summer research has left her learning toward an M.D./Ph.D. program that would allow her to translate her medical research into patient care.

“With the medical (degree) you’re pretty much using what the scientists have discovered to treat your patients,” she said. “But when you get an M.D./Ph.D. you get to do your own research and apply it to your patients. So, it’s a lot longer, but I think it’s worth it. You can have an M.D. and run a lab!”

As she edges to the finish line of her undergraduate degree, Frazer credits the University of New Orleans and its faculty for preparing her for her next career step, and for exposing her to research opportunities that allowed her to broaden those pursuits.

“I think UNO in general gives you a lot of opportunities,” Frazer said. “I’ve gotten to know my teachers and they kind of push you to do things. They are always trying to help you, and I really appreciate that from UNO because I feel like maybe a larger school wouldn’t have given me that opportunity. Here, it’s like you’re able to engage with your teachers a lot more. I can definitely tell they care for you and, academically, it’s prepared me well.”