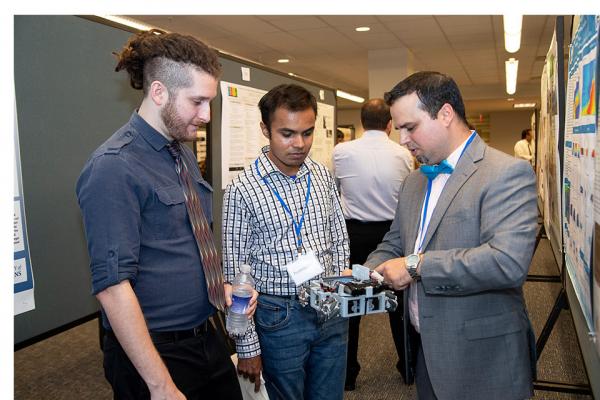 From students in the Lester E. Kabacoff School of Hotel, Restaurant and Tourism creating hot, fruit-filled crepes and sharing cooking tips with an appreciative audience to a mechanical engineering student explaining how to reduce emissions by “tweaking” the thermal energy cycle, Innovate UNO offered a platform broad enough to hold those endeavors and many more.

On Nov. 7-8, the fourth floor of the Earl K. Long Library was the epicenter for the University of New Orleans’s seventh independent showcase in which students were able to present their independent research, scholarly or creative activities to the campus community.

“Quite frankly I think it gets people involved on campus and it allows people to think outside the box,” said business administration major Jeffrey Brown, whose research focused on ways to reduce pet surrenders after adoptions. “It gives students, faculty, everybody a chance to come together.”

Brown’s group project was among 200 entries in a variety of categories presented in poster sessions, oral presentations, artwork, music, performances and exhibits. The presenters were on-hand to explain their entries and answer questions from judges and visitors.

The Office of Research and Sponsored Programs, the Graduate School, and the Earl K. Long Library host the annual research symposium, which is sponsored in part by the Oscar J. Tolmas Charitable Trust.

“I want the presenters to feel an achievement and an accomplishment of ‘Hey, I did this, and I told the world about it,’” Tarr said. “The second part is that I want the world to know what our people are doing.”

As visitors weaved through the aisles that contained artwork and posters filled with graphics, pictures and research summaries, participants were not shy about sharing their projects.

A framed painting  on an easel contained Alexis Chivatero’s project called “The Next Generation.” What appears to be an octopus is visible from afar. A closer viewing, however, brings a startling discovery that the octopus resides within a circle of twisted human bodies upon which a raven is perched. It’s a “semi-satirical” look at what could happen if humans destroy the earth and other intelligent species rise to the top of the order, Chivatero explains.

“I think art is a really good way to get people to realize that humans are very destructive towards the earth so creating sort of satirical pieces like this is a good way of getting people interested in learning about the environment,” she said.

A few rows over, Shisir Acharya, a mechanical engineering student, enthusiastically explained how to reduce power plant emissions. His research targets carbon dioxide, nitrogen and sulfur—pollutants that can cause smog, acid rain and which some scientists have attributed to causing global warming—by  improving the efficiency of the thermodynamic energy cycle using a combination of steam and gas to generate the same amount of power.

After compiling “a lot of data” and using a computer program to run simulations that “tweaked” various components in the power producing cycle, Acharya reached his conclusion.

“Increasing the efficiency in the thermodynamic cycle will result in a better efficient hydro-power system which will ultimately contribute towards reducing the emissions," he said."Less emissions; it’s better for the environment and that’s how I save earth,” Acharya said with a laugh.