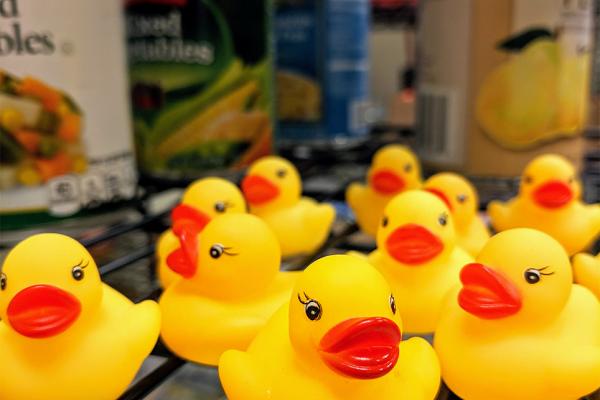 The Office of Student Affairs “bucks for ducks” fundraiser aims to help fill the Privateer food pantry with nonperishable items.

The Office of Student Affairs is looking to fill its on-campus food pantry by hawking rubber ducks. Privateer Pantry donation stations are set up around campus to accept cash—or “bucks for ducks”—that will used to purchase supplies for the pantry.

For each college that raises $250, a campus "celebrity" will represent the college as they float on top of a giant rubber duck on Tuesday, Nov. 20 in the fountain at the Robert Merrick/Latter & Blum Patio.

While the fundraiser is designed to be fun, the issue it attempts to address is a serious matter: food insecurity.

“The Fill the Fountain event is the culmination of two weeks of tabling and crowdfunding to raise money and awareness about the Privateer Pantry, food insecurity experienced on our campus and to stock our shelves with the goal of opening the pantry on a regular basis,” said Reagan Laiche, student affairs operations manager.

The pantry, which opened last year, aims to help University of New Orleans students in need of food. As long as students have a valid UNO ID, they can access the pantry, Laiche said.

The pantry is in the Office of Student Affairs in the University Center, and is stocked with nonperishable food items.

The idea for the pantry grew out of informal talks among staff about conversations overheard between students about skipped meals, Laiche said. A student survey confirmed that food insecurity was a concern for many students.

“About 200 students completed surveys with 180 of those reporting that they would absolutely be in need of food assistance on campus,” Laiche said.

Last spring the pantry offered “pop-up” services, trying to bridge the gap for students when campus food service is not at full service. This fall the goal is to have a set schedule for students to access the pantry, she said.

“The pantry is still operating in pop-up mode, but a set schedule is the driver behind the Fill the Fountain fundraiser,” Laiche said.

And while the “bucks for ducks” fundraiser continues through Nov. 13, donations of unexpired food items can be dropped off at the Student Affairs office during regular University hours throughout the year.

“Because the majority of students who utilize the pantry thus far live in the residence halls, we are asking for items that are microwavable,” she said.

If ideas for donations are needed, the pantry has an Amazon wish list, Laiche said.

The celebrity floaters will be: