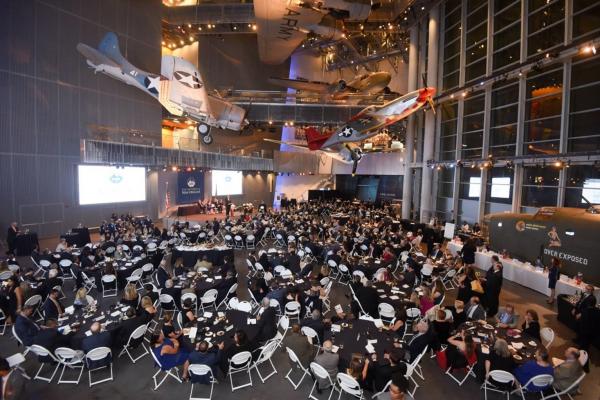 The Distinguished Alumni Gala was held at The National WWII Museum’s Freedom Pavilion.

The University’s academic colleges and the interdisciplinary studies program also honored their own distinguished alumni. “This may not need to be said because I know all of you feel it here tonight but the University of New Orleans is experiencing a wave of momentum,” said President John Nicklow as he ticked off a number of the University’s recent successes including enrollment growth, improved research outcomes and a dramatic increase in fundraising.

In his acceptance remarks, Chauvin detailed his path to UNO including a humorous tale of the ill-fated semester that he spent at another institution as a pre-veterinary science major. After some uncomfortable encounters with large livestock, he decided to transfer. He returned to his hometown and enrolled at UNO, where he earned a bachelor’s degree in accounting in 1974. It was at UNO where he also met his wife of 43 years, Joanne. “So when asked why I continue to support UNO all these years post-graduation, the answer is very simple,” Chauvin said. “I believe strongly that I have a moral obligation to support the institution that provided me with the keys to my success so that future generations of students will be able to experience the same opportunities of personal and professional growth that I have been so lucky to experience.”

Chauvin is currently chair of a Vistage CEO peer support group. He previously served as senior vice president of finance and treasurer for XL Catlin, Inc., a global insurance and reinsurance company. He also was an executive with Global Special Risks, Inc. and Southern Marine & Aviation Underwriters, Inc. Chauvin began his career as an accountant for Price Waterhouse & Co. in New Orleans. He is the 35th honoree to receive the Homer Hitt Distinguished Alumni Award. Lee is the president and executive director of Son of a Saint, a nonprofit that inspires mentorship and enhances the lives of fatherless boys. He founded the organization in 2011 in honor of his father, former Saints player Bivian Lee Jr., who died of a heart attack at the age of 36. Son of a Saint provides emotional support, life skills development and exposure to constructive experiences to its mentees. Lee was named New Orleanian of the Year by Gambit in 2016.

Lee recognized his family, friends and Son of a Saint staff who were in attendance to support him—in particular his mother, Cynthia, who he said taught him respect, empathy and discipline. Lee recounted his decision to stay close to home to attend UNO and described the on-campus jobs that allowed him to meet people from around the world and learn valuable life lessons. He earned a bachelor’s degree in marketing and management in 2006.

“Please continue to support the University of New Orleans; it’s such a great institution,” Lee said. “And I wouldn’t be a good executive director if I didn’t say that, if you’d like to support Son of a Saint, please do.”

The College of Sciences honored Lute Maleki as its 2018 Distinguished Alumnus. Maleki, who earned a doctorate in physics from UNO in 1975, is senior distinguished engineer and executive in charge of LiDAR Development for Cruise Automation, the self-driving unit of General Motors. He previously worked as a scientist at the Jet Propulsion Lab in Pasadena, Calif. The College of Engineering honored Jules Schneider. Schneider, who earned a bachelor’s degree in mechanical engineering from UNO in 1984, has spent 33 years working for Lockheed Martin Space Systems. He’s director of assembly, test and launch operations, making him responsible for all of the final assembly, integration and testing of the Orion Spacecraft at the Kennedy Space Center.

The College of Business Administration honored Philip May, who earned his MBA from UNO in 1992. May is the president and chief executive officer of Entergy Louisiana, LLC, which serves more than one million electric customers in the state. He is responsible for the company’s electric transmission and distribution systems, customer service, regulatory and public affairs, economic development programs and charitable contributions, as well as its financial performance.

The College of Liberal Arts, Education and Human Development honored Angie Gates, who earned a bachelor’s degree in communications and a master’s degree in arts administration from UNO. She is the director of the Office of Cable Television, Film, Music and Entertainment for the District of Columbia and interim director of the Commission on the Arts and Humanities. Gates currently serves as a governor of the Recording Academy, Washington, D.C. chapter (The Grammys). Mark Romig, the 2016 Homer Hitt Distinguished Alumni Award recipient, served as the master of ceremonies and UNO jazz studies students provided the musical entertainment throughout the evening in the majestic Freedom Pavilion with its soaring ceiling.

The gala’s venue is a testament to UNO’s lasting impact on the community—The National WWII Museum was conceived in UNO’s history department by professors Stephen Ambrose and Nick Mueller, the museum’s former president and CEO.