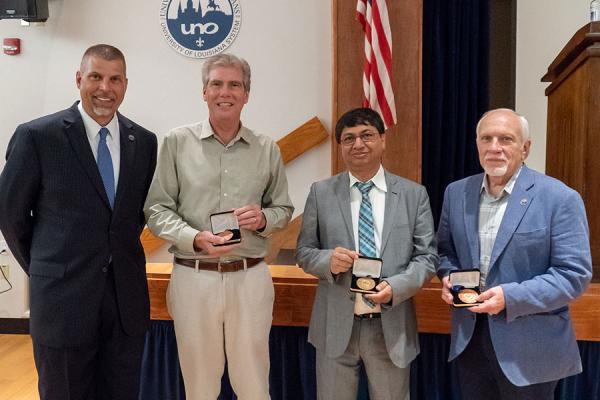 The recipients of the three medallion awards are:

• Peter Schock, professor and chair of the Department of English and Foreign Languages, awarded the Cooper R. Mackin Medallion. The Mackin Medallion was established to honor the third Chancellor of the University of New Orleans and was first presented in 1998. It is awarded to a faculty or staff member who has made outstanding contributions in support of the University’s mission.

“Not only has Dr. Schock shown exemplary leadership as department chair, but he has taken a keen interest in working to increase enrollment, retention and the overall student experience,” Nicklow said. “His committee work and his passion across the University have been tireless.”

•M. Kabir Hassan, professor of economics and finance, awarded the Gordon H. “Nick” Mueller International Leadership Medallion. It is presented in recognition of the contributions that were made to the University by Mueller, who spent 33 years at UNO as a professor, dean, vice chancellor, the founding president of the UNO Research & Technology Park and co-founder of The National World War II Museum. It is awarded to an individual who has provided significant leadership toward the internationalization of the University.

“Dr. Hassan is an internationally renowned scholar in his field,” Nicklow said. “He has presented more than 300 research papers and participated in more than 100 seminars, panel discussions and conferences around the world, helping to raise the global profile of the University of New Orleans.”

•Kim Jovanovich, interim associate dean of the College of Engineering, received the Presidential Staff Medallion. It is awarded to the staff member who has demonstrated outstanding service to the University community.

“In addition to his roles as interim associate dean, Kim teaches and he is the most enthusiastic ambassador for the profession of engineering and the College of Engineering that we have,” Nicklow said. “His one-man-show on the wonders of engineering has built a reputation around the state.”