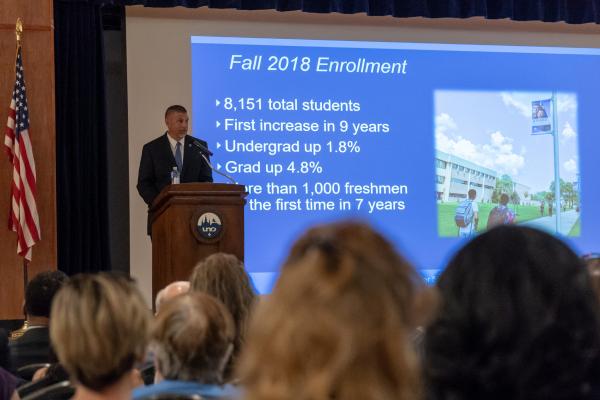 President Nicklow speaks during his biannual State of the University address before University of New Orleans faculty and staff Friday afternoon.

The University of New Orleans is moving up, President John Nicklow said Friday, during his biannual State of the University address before UNO faculty and staff.  The University’s momentum is evidenced by the increase in student enrollment, ”excellent” progress on the research front and additional community partnerships being developed, Nicklow said in focusing on his three main priority areas.

Since taking the helm of the University in 2016, Nicklow has said his top priority is to increase enrollment.  On Friday he reiterated that stance and praised faculty and staff for the “team effort” in boosting the University’s total student enrollment for the first time in nearly a decade.

Freshman retention also increased from 62.4 percent to 71.2 percent, he said.

“We have 8,151 students, as of census day, for the fall 2018 semester,” Nicklow said. “A bump of 2.4 percent represents our first year-over-year enrollment increase in nine years … This was and continues to be a team effort, and this team is reaching new milestones in many ways.”

One of those milestones is that the University brought in more than 1,000 freshman students for the first time in seven years and saw significant increases in the number of African-American and Hispanic students.

“We did not sacrifice quality for quantity,” Nicklow said. “This freshman class has an average ACT score of 23 and GPA of 3.3; that’s the highest GPA in 10 years.”

Nicklow called the enrollment increase a “significant sign of progress” and announced raises—pending board approval—for full-time unclassified staff and faculty hired before Jan. 1, 2018. Classified employees received raises and cost of living adjustments increases earlier in the year through the state legislature, he said.

“Because of all that good work, I am taking a proposal to the Oct. 25th University of Louisiana System Board of Supervisors meeting for a 3 percent raise that will be effective on Nov. 1st,” Nicklow said.

Nicklow said, for most employees, the raise would be either 3 percent or $1,500, whichever is greater.

“I recognize that, particularly for our longer-serving employees, this does not make up for all those years without a raise. But I hope you will take this as a good-faith gesture on my part,” Nicklow said. “And as many of you know, I support incentives and I am committed to rewards. My goal is this: every year we increase overall enrollment, I will support a salary increase.”

Another positive sign of the University’s health is the hiring this academic year of 15 new faculty members, 14 of whom started this fall. Nicklow recognized the group, along with the University’s new dean of students Carolyn Golz; the new lead for enrollment management, Mary Beth Marks; and the new associate vice president for professional and continuing education, Tina Chang.

“This is a talented and diverse group and we are so fortunate to have them on our shared journey,” Nicklow said.

As a university, academic programs should always be evolving, Nicklow said. To that end, the University has a new master’s degree in finance already in place and master’s degrees in cybersecurity and systems engineering also have been approved, he said.

In addition, several new certificate programs are in the works, including one in data analytics and one in software engineering, he said. In collaboration with Lakefront Airport, a bachelor’s degree in pilot training is in the development stage, as well as a bachelor’s degree in construction management, Nicklow said.

A fiscal benchmark noted for the University is the $2.5 million in new gifts and pledges secured this year, which is 35 percent of the $7 million fundraising goal.

“That’s very ambitious, recognizing that only a few years ago, we raised a few hundred thousand dollars a year,” Nicklow said. “But I hope you’ll see that by setting lofty aspirations, we are pushing ourselves to break through barriers and build the kind of support that this university needs to flourish.”

On the research front, Nicklow said the University is seeing “excellent progress.” Externally sponsored expenditures increased from $23.2 million last fiscal year to $31.5 million in 2018, he said.  While research and development expenditures in National Science Foundation-eligible fields increased for the first time since 2011, up 1.4 percent to $15.98 million.

He attributed the growth to several factors, including an internal grant program that allows faculty and research employees to hone their grant-writing skills for developing new research and scholarly endeavors and to the Office of Research and Sponsored Programs’ new faculty institute in which new faculty members participate in interactive sessions on research and teaching topics.

“The increase is positive,” Nicklow said, “but more importantly, it’s an indicator that we are building a trend and momentum for future research growth.”

Nicklow, who is an engineer, used the concept of momentum to describe the University’s overall progress. In engineering, momentum describes the relationship between mass and velocity, he said.

The UNO community of faculty, staff, students, supporters—along with their pride and morale—represent the mass, Nicklow said. The velocity is the hard work put toward various initiatives, he said.

“With those components together, our momentum grows and becomes unstoppable,” Nicklow said. “I thank you for the vital role you have played in our resurgence. I’m so proud to be part of this team with you, and I am so excited for what we will accomplish together still.”

Visit from U.S. Ambassador Among Highlights at 45th Session of UNO-Innsbruck Summer Program

University of New Orleans Gets $1.2 Million NSF Grant to Create Center for Equity and Diversity in Engineering

The University of New Orleans has received a $1.2 million National Science Foundation grant to create a Center for Equity and Diversity in Engineer  Read more