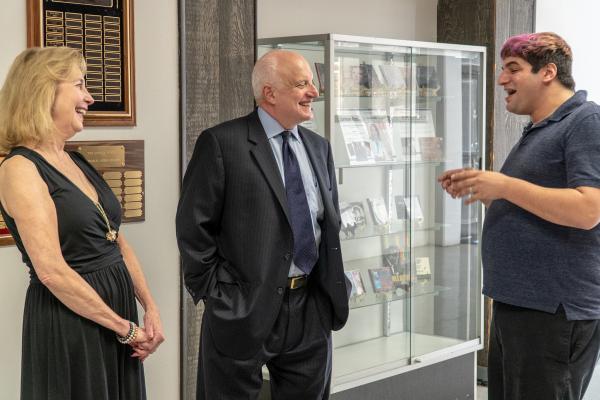 From left: Anne Uddo, Basile J. Uddo and Michael Ciolino get acquainted during a gathering to celebrate the memory of Joseph Patrick Uddo and the opportunity his legacy creates for students like Ciolino.

The University of New Orleans has awarded the Joseph Patrick Uddo Scholarship in Screenwriting for the 2018-19 academic year to Michael Ciolino. The scholarship, which provides a total of $1,500 in tuition and fees for a full academic year, honors the memory of Uddo, a filmmaker and New Orleans native who died in 2008. Ciolino and members of the Uddo family gathered with others from the UNO community at a ceremony in UNO’s Performing Arts Center on Wednesday, Sept. 19 to celebrate Uddo’s memory and the opportunity his legacy creates for talented UNO students like Ciolino.

Ciolino, a New Orleans native, graduated as a National Merit Finalist from Ben Franklin High School in 2009. He went on to receive a Bachelor of Arts in English with a concentration in film studies from Loyola University. Inspired by adaptations of Stephen King and the television shows of Ryan Murphy, Michael is currently working on his second feature-length script, a tale of depression and banshees set in contemporary New England.

The Joseph Patrick Uddo Foundation started a scholarship at UNO to honor his brother's memory in a way that reflected his love of filmmaking, Paul Uddo said. A $40,000 gift in 2012 established the Joseph Patrick Uddo Scholarship in Screenwriting, and an annual award is made to an entering graduate student who is pursuing a Master of Fine Arts degree in screenwriting.

"Joseph was passionate about filmmaking and especially about the art of screenwriting," Paul Uddo said. "This scholarship is intended to encourage and support others who share that passion. We are fortunate to have an outstanding film school here at UNO and we believe that this is a fitting place to memorialize Joseph, and to share his love of filmmaking with other young artists."