Plaque Unveiling for Hall of Distinction 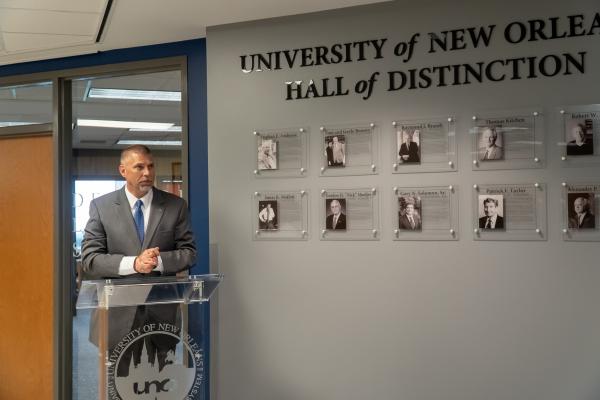 University of New Orleans President John Nicklow talks about the contributions of the inaugural class of the Hall of Distinction honorees.

As the University of New Orleans marks its 60th anniversary, President John Nicklow said it remains one of the region’s foremost public assets that not only generates a huge economic impact for the city and state, but also conducts groundbreaking research and transforms the lives of its students.

“The people who we are honoring this afternoon have also had a transformative effect on this institution and our beloved city,” Nicklow said during the unveiling ceremony. “The University of New Orleans and the city of New Orleans would not be the same without these 11 people.”

Inclusion in the Hall of Distinction reflects the respect and admiration the University holds for the 11 honorees who represent different professions, different areas of expertise and even different eras, Nicklow said.

“But every single one of them is a difference-maker whose commitment, dedication and selflessness helped create a better city and a better UNO,” Nicklow said.

The plaques are stationed “in a place of honor and recognition” on the fourth floor of the library—which Nicklow called the “emotional and geographical center of campus.”

Thursday’s unveiling follows the Hall of Distinction’s black tie gala, presented by Hancock Whitney, held on Sept. 7 at the NOPSI Hotel in honor of the inaugural class.

“I’d like to congratulate all of our honorees who are with us today, as well as thank those family members representing an honoree,” Nicklow said. “I hope today’s event makes you proud of our institution and determined to help it continue to flourish. Thanks to all of you who play such an important role in the University of New Orleans.”

The 11 people selected for the inaugural class of the Hall of Distinction are:
•    Stephen E. Ambrose was a renowned UNO historian, author and co-founder of the institution that would later become The National World War II Museum. He taught at UNO for 28 years. Ambrose died in 2002.
•    Tom and Gayle Benson: The owners of the New Orleans Saints, the New Orleans Pelicans and GMB Racing Stables. The Bensons’ philanthropy has benefited the arts, education, faith-based causes, healthcare and the military throughout New Orleans and the region. Tom Benson passed away earlier this year.
•    Raymond J. Brandt is the president and CEO of the Ray Brandt Automotive Group. An attorney and certified public accountant, Brandt now has more than a dozen different automakers in his portfolio. He serves on the UNO Foundation Board.
•    Thomas Kitchen is the former president of Stewart Enterprises and Avondale Industries. Kitchen earned both a bachelor’s degree in accounting and an MBA from UNO. He’s the 1997 recipient of the Homer Hitt Distinguished Alumni Award.
•    Robert W. Merrick is the chairman and CEO of Latter and Blum, the Gulf South’s largest full-service real estate brokerage firm. In 2014 he received an honorary doctorate from UNO. As of this year, Merrick and Latter & Blum are responsible for more than $2 million in donations to UNO.
•    James R. Moffett is chairman emeritus of Freeport-McMoRan, one of America’s leading independent oil and gas firms. He is a former board member of the UNO Foundation. In 1993, he received an honorary doctorate from UNO. As of this year, Moffett’s personal giving and his philanthropy through Freeport-McMoRan to UNO exceed $5.8 million.
•    Gordon “Nick” Mueller is president and CEO emeritus of The National World War II Museum. Along with Stephen Ambrose, he is co-founder of the museum. Before stepping into the museum world, Dr. Mueller spent 33 years at UNO as a professor, dean, vice chancellor and the founding president of the UNO Research & Technology Park.
•    Gary N. Solomon Sr. is chairman and CEO of Crescent Bank & Trust, which employs 650 people in 15 states. He also manages a venture capital firm. He is a 1979 graduate of UNO and the 2000 recipient of the Homer Hitt Distinguished Alumni Award.
•    Patrick F. Taylor was chairman, president and CEO of Taylor Energy Company, and the creator of the TOPS program, the country’s first state-aid merit-based tuition program. He served on the UNO Foundation board. Taylor died in 2004.
•     Alexander P. Tureaud Sr. is an iconic figure in the history of civil rights in New Orleans. He was the local attorney for the NAACP Legal Defense and Education Fund. In 1958, Tureaud and Ernest Morial successfully filed suit on behalf of a group of African-American students, ensuring that the University of New Orleans opened as the first racially integrated public university in the South. Tureaud died in 1972.