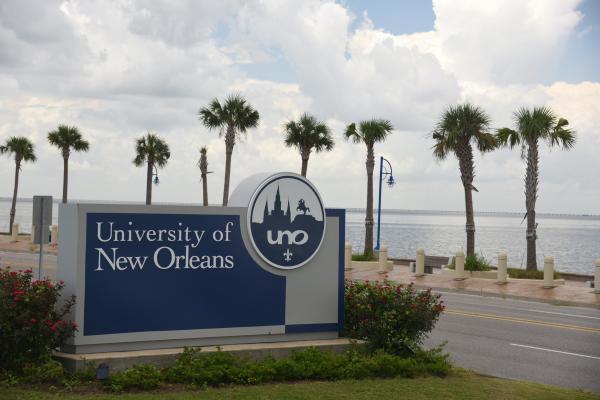 The Creative Writing Workshop at the University of New Orleans will welcome a group of ten acclaimed writers from 10 different countries when they visit New Orleans on Thursday, September 27.

The Creative Writing Workshop at the University of New Orleans will welcome a group of ten acclaimed writers from ten different countries when they visit New Orleans on Thursday, September 27. The campus community and the public at large are invited to hear from this group of international poets, essayists, journalists and specialists in fiction and non-fiction as they share their insights through a panel discussion and perform readings of their original works.

“It's a huge honor that our program was selected for this visit,” said M. O. “Neal” Walsh, director of the Creative Writing Workshop. “We couldn’t be more pleased that our students will have the benefit of hearing from this diverse group of artists, each of whom represents a different set of influences from around the globe.

“I expect this group will not only expose us to books we may never have read but also offer surprising insights on how some of the classics we are familiar with have influenced writers all over the world.”

Events get underway at 4 p.m. with a panel discussion involving five of the writers discussing the books that changed their lives. Following the panel, the other five writers will perform readings of their original works. After a question and answer session, the Creative Writing Workshop will host a reception honoring the guests.

Gina COLE (fiction writer, poet; New Zealand) is the author of Black Ice Matter, which won Best First Book of Fiction at the 2017 Ockham New Zealand Book Awards, and the winner of the 2014 Auckland Pride Festival’s creative writing competition for the poem “Airport Aubade.” Cole’s work has been widely anthologized and she has been keynote speaker at the 2017 Auckland Writers Festival and the Same Same But Different LGBTQIA+ Writing Festival. She is an important voice for queer rights in New Zealand and a barrister specializing in Family Law and her participation is made possible by Creative New Zealand.

Rumena BUŽAROVSKA (fiction writer, editor, translator; Macedonia) has had three books of fiction published and translated into several languages. Her short story anthology Mojot Maž, which won the Edo Budiša Award for Best Short Story Collection in 2016, will be released in the U.S. in 2019 as My Husband. An award-winner teacher, she is also an activist on behalf of marginalized populations in her country. In 2016, Literary Europe Live named her one of Ten New Voices From Europe. She participates courtesy of the Bureau of Educational and Cultural Affairs at the U.S. Department of State. Buzarovska spearheaded Macedonia’s answer to the #metoo movement (#Segakazuvam, which translates to “I’m Telling Now”). She was listed in 2016 as Ten New Voices From Europe to watch following her award winning teaching and writing and work as an activist for marginalized populations in her country.

Rasha KHAYAT (fiction writer, translator; Germany) was raised in Saudia Arabia. She is the author of the novel For We Are Elsewhere Now which has been nominated for the 2016 Klaus Michael Kühne Prize for best first novel, and translated into French and Arabic. Her blog called the WestEast Diva is credited as being a window into the Arab world for native Germans. A recipient of the Jürgen Ponto Foundation Fellowship, the Robert Bosch Foundation’s Research Fellowship, and the Siegfried-Lenz Fellowship, she also writes for the theater and newspapers, mainly on multiculturalism. Her blog serves as a window into the Arab world for native Germans. She participates courtesy of the Max Kade Foundation.

Chong-Kai HUANG (fiction writer; Taiwan) is the author of four novels including Blue Fiction (2014), voted one of the Ten Best Books of The Year by The China Times Book Review, and The Contents of the Times (2017), winner of the 2018 TIBE Book Prize for Fiction, and one of Mirror Media Review’s Ten Best Books of 2017. He is a member of  Alphabet Lab, a collective of experimental writers and critical theorists in Taiwan. Huang’s participation is made possible by the Taiwan Ministry of Culture. Chong-Kai HUANG is a member of the Alphabet Lab, a collective of Taiwanese experimental writers and theorists, publishing serialized novels based on each letter of the French alphabet. Huang is a history scholar and experimental writer.

Umar TIMOL (poet, fiction writer; Mauritius) is the author of four poetry volumes, two novels, and two comic books; the poetry collection 52 Fragments for the Beloved (2016) received the Poetry Prize at the Moldova Poetry Festival. Timol is a teacher, photographer, founding member of the mixed-genre journal Point Barre, and a frequent presence at poetry festivals. His participation is made possible by the Bureau of Education and Cultural Affairs at the U.S. Department of State. Timol is a well-known teacher, photographer, and activist in his country. He aspires to master every form and genre of art to use in his own work and hopes to uses these skills to help to introduce a culture of poetry to the Mauritian canon.

Aušra KAZILIŪNAITĖ (poet, performer, journalist; Lithuania) has four volumes of poetry, including the English-language collection The Moon is a Pill (2018); Mėnulis yra tabletė, which won the 2016 Jurga Ivanauskaitė Prize; her 2016 volume I am Crumbled Walls was shortlisted for Best Book of the Year by 15min.lt. In 2016, Kaziliūnaitė was awarded the Young Artist Prize from the Lithuanian Minstry of Culture. Her participation was made possible by a grant from the Bureau of Educational and Cultural Affairs at the U.S. Department of State. Kaziliunaite is a philosopher whose writing challenges traditional form and scope; she describes her work as a “sacred madness of creativity.” Among her many awards, Kaziliūnaitė was granted Artistic Creator status by the Republic of Lithuania.

TAKIGUCHI Yūshō writes stories about individual and collective memory, stylistically marked by a roaming, omniscient narrative voice and multiple temporalities. His novella Resonance (Gakki) won the 2011 Shincho Prize for New Writers; in 2015, his novella The Jimi Hendrix Experience was nominated for the distinguished Akutagawa Prize; the following year Takiguchi won that award for The Unceasing. Takiguchi uses elements of memory and sound to inform his widely-awarded writing, which weaves pop culture with emotional experiences. Takiguchi once wrote a piece titled The Jimi Hendrix Experience which includes almost no Jimi Hendrix. He participates courtesy of the Japan Foundation.

Aram PACHYAN (fiction writer, essayist; Armenia) is the author of story collections Robinson (2011) and Ocean (2014). His novel Goodbye, Bird (2012) has been translated into English, with French, Bulgarian, Arabic, and Georgian editions forthcoming, and was staged at the Armenian Center for Contemporary Experimental Art. In 2010, Pachyan’s experimental writing has inspired plays and chamber music compositions. His work is highly acclaimed and has been influential among other writers in his region. Pachyan uses magical realism to illustrate the ways that emotion can shape memory and the intersection of art and cultural identity. Pachyan received the Presidential Prize for his short stories. His participation was made possible by the Bureau of Education and Cultural Affairs at the U.S. Department of State.

Amara Nicole OKOLO (fiction writer, non-fiction writer; Nigeria) is the author of the novel Black Sparkle Romance (2014) and the story collection Son of Man (2016). A participant in Chimamanda Adichie’s Farafina Creative Writing Workshop (2015) and the Invisible Borders TransAfrican Project (2017), she often speaks at book events and festivals. She is a practicing lawyer. Her participation was made possible by a grant from the Bureau of Educational and Cultural Affairs at the U.S. Department of State. Okolo is a practicing lawyer whose works are used in classrooms abroad and Okolo is a frequent speaker at literary festivals. Her work is heavily influenced by her mother, who risked abuse to encourage Okolo’s educational and artistic ambitions.

Tehila HAKIMI (poet, fiction writer; Israel) writes poetry, fiction and graphic novels. Her poetry volume We’ll Work Tomorrow (2014) received the 2015 Bernstein Prize for Literature, and, alongside her graphic novel In the Water the Yehoshua Rabinowitz Foundation Prize for Literature. Hakimi received the 2014 Israeli Ministry of Culture Prize for Emerging Poets. She works as a mechanical engineer. Her participation is made possible by the United States-Israel Educational Foundation. Hakimi is a mechanical engineer and graphic novelist whose work is characterized as “complex, riddle-driven work that takes pleasure in dismantling and disruption” (Haaretz Literary Supplement).