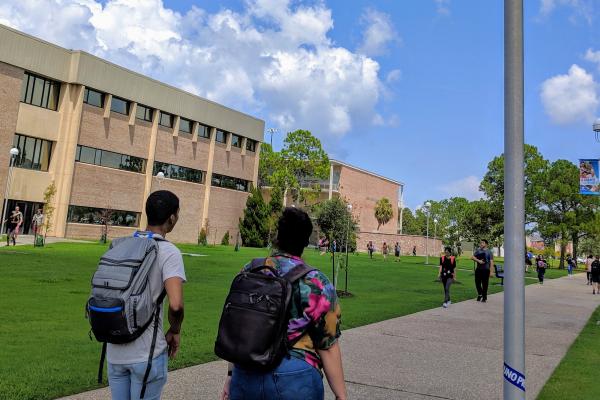 Total student enrollment increased this fall at the University of New Orleans. Students are seen walking on campus Aug. 16, 2018, the first day of the fall semester.

By growing both the undergraduate and graduate student populations, the University of New Orleans increased its total enrollment for the first time in nine years. The University’s fall 2018 enrollment is 8,151 students, representing an increase of 2.4 percent compared to the previous fall’s total of 7,964 students.

The University brought in more than 1,000 freshman students for the first time in seven years and saw significant increases in the percentage of African-American and Hispanic students. It is also the University’s most academically prepared freshman class in years.

“These enrollment figures are the byproduct of a lot of hard work from our staff and faculty, and I could not be more proud,” said President John Nicklow. “They demonstrate that there is a growing awareness of the fantastic opportunities that exist at the University of New Orleans. They also show that we are not sacrificing quality for quantity with our new students. This is another crucial sign of the University’s growing momentum.”

Here are some other highlights of the University of New Orleans’ fall 2018 enrollment:

The University experienced the largest year-to-year percentage increase in undergraduate students since 2006.

The 2018 freshman class has the highest average ACT score (23) of the past four years and the highest high school grade point average (3.3) in the past 10 years.

The University increased its number of freshmen by 6.2 percent compared to the fall 2017 class.

First-year retention (percentage of students who remained enrolled from freshman to sophomore year) increased from 62.4 percent to 71.2 percent.

“The retention efforts from our faculty and staff have been very meaningful,” Nicklow said. “These significant gains mean that we are doing a better job of supporting our students once they are on campus and equipping them with the tools they need to persist and, eventually, earn their degrees.”