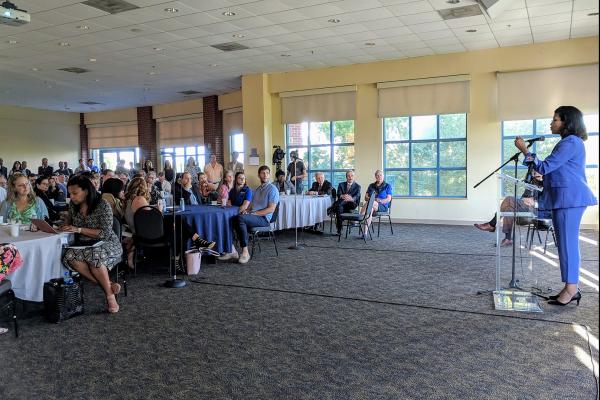 “It’s very important for me to move around the state, to visit awesome campuses like UNO,” Reed said. “You cannot do great policy from Baton Rouge on behalf of higher education and our students. It requires that you move about the state.”

A standing-room-only crowd, including state and local elected and appointed officials, filled the ballroom of the Homer Hitt Alumni and Visitors Center for a question and answer session.

The University of New Orleans was founded on the primary pillars of academic quality and accessibility, Nicklow told the group.

“We are the only public, urban-serving research university in Louisiana,” Nicklow said. “Nearly 40 percent of our undergraduates are first-generation college students. That’s incredibly significant. It’s one of the big reason I can say that the University is often credited with having built the middle class of metro New Orleans.”

Reed, who was appointed by the Board of Regents in April, has set out to visit the state’s 32 college and university campuses on what she called a listening tour. She described herself as the “chief advocate for talent development in Louisiana.”

“Higher education is special. We have a special responsibility,” Reed said. “We have a special calling because we have the awesome job to produce future leaders for this state and for the nation.”

Reed said she would push to keep college education accessible, affordable and attainable. Her message for the state legislature on funding issues is to make sure they understand that higher education should be seen as an investment, not an expenditure.

“We are the smart investment, the best investment,” Reed said. “I appreciate the legislators who worked so hard to stabilize the budget so that we can move from survive to thrive in Louisiana.”