Chauvin, Lee To Be Honored at 2018 Distinguished Alumni Gala 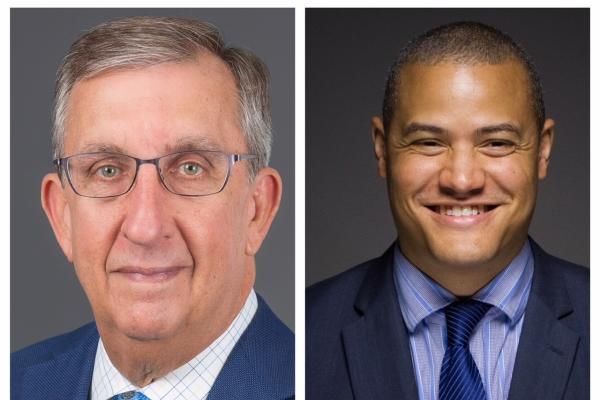 Retired insurance executive William Chauvin has been selected as the recipient of the 2018 University of New Orleans Homer L. Hitt Distinguished Alumni Award, the UNO Alumni Association announced. Additionally Bivian “Sonny” Lee has been named the 2018 Homer Hitt Young Alumnus of the Year. Both men will be honored at the Distinguished Alumni Gala, which will take place on Nov. 1 at 7 p.m. in the National WWII Museum’s United States Freedom Pavilion: The Boeing Center.

“It’s difficult to think of two individuals who embody the values of the University of New Orleans more than Bill and Sonny,” said University of New Orleans President John Nicklow. “Both men exemplify determination and selflessness in their professional and community work. They have made a mark on their city and their alma mater through their positive influence and career accomplishments.”

Before retiring in 2016, Chauvin served as senior vice president of finance and treasurer for XL Catlin, Inc., a global insurance and reinsurance company. He was previously an executive with Global Special Risks, Inc. and Southern Marine & Aviation Underwriters, Inc. Chauvin began his career as an accountant for Price Waterhouse & Co. in New Orleans. He earned a bachelor’s degree in accounting from the University of New Orleans in 1974.

Chauvin has remained actively involved with his alma mater. He is a board member of the University of New Orleans Foundation. He was the president of the UNO Alumni Association from 1999-2000. He has also served as a board member for several local elementary schools and high schools.

Lee is the president and executive director of Son of a Saint, a nonprofit that inspires mentorship and enhances the lives of fatherless boys. He founded the organization in 2011 in honor of his father, former Saints player Bivian Lee Jr., who died of a heart attack at the age of 36. Son of a Saint provides emotional support, life skills development and exposure to constructive experiences to its mentees. He was named New Orleanian of the Year by Gambit in 2016.

Son of a Saint has a partnership with Privateer Athletics, which serves to benefit both the UNO student athletes and the boys from Son of a Saint through community service and mentorship activities. The student-athletes hold tutoring hours on campus for the mentees and serve as role models to the boys.

Lee earned a bachelor’s degree in marketing and management in 2006 from the University of Orleans.

The gala’s venue is a testament to UNO’s lasting impact on the community—the National WWII Museum was conceived in UNO’s history department by professors Stephen Ambrose and Nick Mueller, the museum’s former president and CEO.