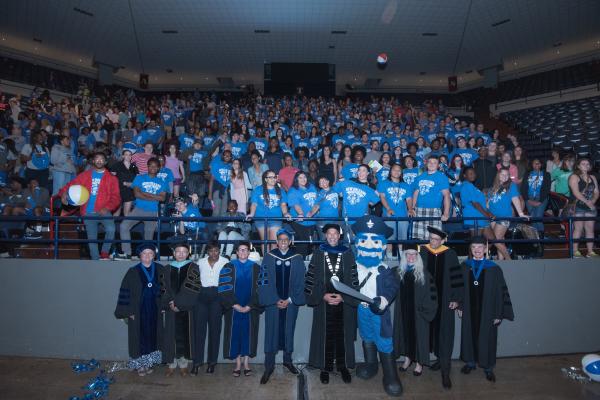 While Monday marked the start of the fall semester for thousands of students at the University of New Orleans, on Friday the Class of 2022 got a welcome to campus party in its honor. As a precursor to the first day of class, first-year students were feted during convocation at the UNO Lakefront Arena.

The University’s tradition, which included faculty marching into the arena in full academic regalia while Pomp and Circumstance played, commemorates the start of the academic journey for new students with a formal opening ceremony followed by free food and games.

It is in this same venue that these students will don their own gown and mortar board to conclude their undergraduate journey to a college degree.

University President John Nicklow told the students that they should be proud of their academic accomplishments thus far, and that they have taken “a leap toward enrichment,” by enrolling at the University of New Orleans. However, he told them much work lies ahead.

“I expect there to be sacrifice and even some struggle in your future. Your intellect will be challenged,” Nicklow said.  “Make no mistake; our expectations of you are high. But that is not something to fear. Embrace it and focus on your ability to persist; it is all part of higher learning, and you would not be here today if we weren’t confident in your ability to succeed.”

Nicklow told students that they were on a “shared journey” with the University’s faculty and staff who would be there to support and guide.

“Our singular goal is to support you, whenever and however you need it, in meeting those expectations,” he said.

Nicklow told students that college is a “transformative experience,” but that they must be open to growing, learning and getting involved on campus.

That “get involved” theme was echoed by Carolyn Golz, associate vice president for student affairs and dean of students, and Kenady Hills, Student Government Association president.

Golz, who arrived on campus in mid-July to take her new job, shared with students her fears as she drove from Santa Cruz, Calif. to New Orleans.

“Although I was excited to be your dean, it was a long trip and I had a lot of time to worry,” Golz said.

She worried over whether she would fit in, like her new surroundings or make new friends, Golz said.

Golz said she “talked herself down from the anxiety” by focusing on what she could do to be successful in her new job. She gave students three tips for transitioning:

“I want you to know, you are embarking on an exciting step in your life,” Golz said. “You are well-prepared, you belong here and this is your opportunity to create the future about which you have dreamed.”

Hills told students how being involved in campus life instead of secluding herself in her dorm room helped galvanize her evolution from being a homesick student ready to call it quits to becoming a student leader.

“Be open to transformation. Be ready for change,” Hills said. “Be excited for your new journey of self-exploration. Be willing to join organizations, and if the first club doesn't fit you, be willing to join a new one that does.”

Hills concluded her remarks by inviting students to take part in their first chant as a Privateer.

As the students stood and chanted, twin cannons filled with confetti exploded and inflated, multicolored beach balls drifted from the ceiling.

The festive ending carried over to the dinner and games that awaited students following the convocation.

Tiera Gaines of Chalmette was draped in silver and blue streamers as she headed for the food line. Having already made runs to Walmart and the financial aid office, Gaines said she was ready to explore campus life.

“Michelle can’t leave me, she’s stuck with me now,” Dixon said nudging Huang, who smiled. “She knows that!”