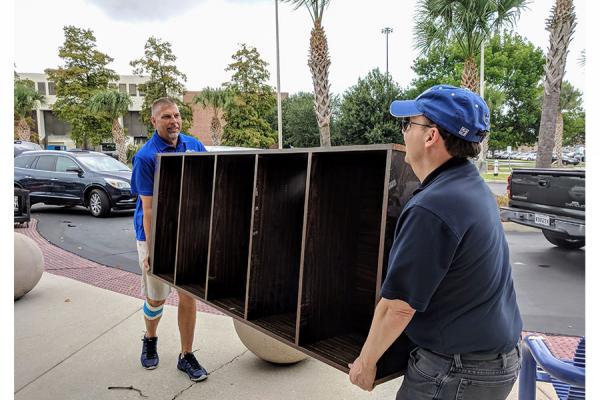 Tons of volunteers turned out for New Student Move-In Day on Thursday at the University of New Orleans, including University President John Nicklow and Matt Tarr, vice president for research and economic development

Hurricane Katrina and 11-feet of floodwater in her parents’ house in New Orleans’ Lower Ninth Ward resulted in the family’s evacuation to Texas, but that did not stop Amber Johnson from following in her mother’s footsteps and attending the University of New Orleans.

As a teenager, Johnson’s mother, Debra Jackson-Johnson, had taken three city buses from the Desire public housing complex to attend the University.

At UNO Jackson-Johnson said, she found a nurturing environment and professors she felt were invested in pushing her to succeed. She influenced her younger sister to attend the University and knew one day her daughter would as well.

“It was her destiny,” Jackson-Johnson said, laughing, as she helped her daughter move into her room in Pontchartrain Hall.

Amber, a graduate of East Ascension High School, said she plans to major in history and film production.

“I believe it’s a very open and involved college,” Johnson said. “Some colleges you feel like a number; I think I will feel more like an individual here and be able to achieve my dreams of being a film producer.”

Jackson was among scores of new students who arrived on campus for New Student Move-In Day Thursday. They arrived with parents, grandparents, siblings, friends and others in tow. Moreover, they brought stuff, lots and lots of personal stuff.

“I didn’t know how we were going to get all of this up here,” said Gina Papapanagiotou of Mandeville, whose daughter Jackie Parks is a first-year student. “I was so glad to see all of the help!”

A small army of University of New Orleans volunteers, including President John Nicklow, helped incoming students get settled into their campus digs.

“We have a ton of volunteers from across campus; it is students, it’s faculty, it is staff, it is alumni,” said Mike Hoffshire, assistant director of First-Year Experience. “Dr. Nicklow is out here, which is really fantastic, so it’s really an all hands on deck kind of day!”

Hoffshire said the concerted move-in effort is designed as a welcome to campus and to help give students a positive experience. Later students will have a cookout in their honor in the courtyard of the residence hall.

“All of our student organizations come out, we serve dinner, there’s a DJ,” Hoffshire said. “It’s just a real fun time, sort of a good way to welcome them.”

Norman Saltzman, who helped his granddaughter Maggie Arsement of Crowley, La., said he was impressed with the campus and the warm reception they received.

“I was very excited to see how friendly everybody was,” Saltzman said. “You don’t see that a lot away from home. I was very impressed.”