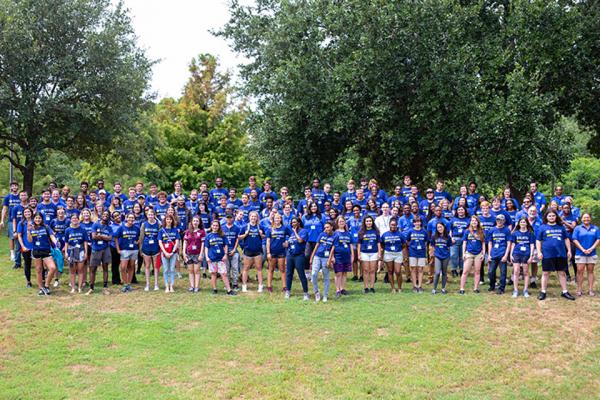 The intensive six-day residential program aimed at solidifying the academic undergirding of incoming freshmen who have chosen to pursue majors in science, technology, engineering and math wrapped up its fourth year at UNO on Aug.7.

In its inaugural year, the camp enrolled 33 students and has increased participation each year. This year, the camp attracted 110 students with representatives from each STEM field, Schluchter said.

“Our goal has always been to try to get up to at least 100,’ Schluchter said. “We had representatives from all of the majors, so that makes me think that we are reaching out to every potential major, every potential student.”

Schluchter attributes the growth in part to the program becoming better known. However, having a record of accomplishment to tout also makes the camp more attractive to parents and students, she said.

The retention rates for STEM Scholars students have run three to 12 percent higher than all first-time, full-time freshmen, according to Schluchter.

“After three years we can show retention data, that this improves retention,” she said. “I think parents and students respond to that; they know what’s happened in the past.”

Several STEM Scholars said the camp helped to ease some of their freshmen jitters and made them feel better prepared.

“I went into (camp) not strong in math, and came out with the highest average in the class! I even got an award for it,” said Joshua Zickler, of St. Louis, Mo., who plans to major in biology and become a veterinarian. “So it’s definitely prepared me for the pace of college.”

Melissa Jarvis, from Alexandria, La., who plans to major in physics with a career goal of becoming an orthopedic surgeon, said the camp stimulated their sluggish “summer” minds.

“They gave us a lot of work to do which really refreshed a lot of stuff I’d learned in the past and will have to use in the future,” Jarvis said. “We’re all kind of brain dead after the summer, so this helps wakes us up.”

The STEM Scholars program also aims to tackle the nationwide shortage of STEM graduates and the counteract a troubling national statistic: 40 percent of students who start as STEM majors do not graduate in that same major within six years, according to Schluchter.

“We are piloting a program such that every camp student gets a peer mentor who meets with them once a week to make sure they are on track, help answer any questions, give them advice on handling tough situations, etc.,” Schluchter said.

By pairing students with STEM mentors, the camp also helps students to make the social connections earlier so they can build a new social network at the University, Schluchter said.

Student mentors also were on hand during the camp.

Claire Melancon, a senior majoring in biology, was a mentor who also had attended STEM Scholars camp.

“It covered like the first semester worth of work in biology,” she said. “It makes the transition into it really easy because they give you the (text) book.”

Fellow senior and camp mentor Efe Sobotie recalled her first biology class as a freshman with a laugh.

“I think this would have helped me,” Sobotie said referring to the camp. “The first biology class was a shock.”

The Howard Hughes Medical Institute financed the camp in part with a five-year $1.5 million grant. Organizers also depend on a crowd-funding project to help offset a portion of the fee that students pay to participate. Students pay $250 for the program.

In exchange, they get five days of on-campus room and board; academic training that includes refresher courses in math and science; and tips on recognizing and avoiding transitional pitfalls, such as a lack of effective study habits.

“My first year of college was a train wreck,” Jerry Howard, professor of biological sciences told scholars during a segment he led on learning strategies. “My second year was a dumpster fire.”

Students will need to know not only how to apply information they have learned, but to analyze that data, pull together the facts and create solutions.

“This is not a continuation of high school,” Howard said. “Information is no longer the important thing; it’s what you can do with it.”

Schluchter says the STEM Scholars program is Howard’s “baby”, an initiative he researched and helped birth at the University of New Orleans.

“This is what I wished someone had told me,” Howard said. “I had counselors who told me, ‘You should go to college,’ and that’s as far as it went. I got to (the University of California at) Davis and it was like, ‘Oh, my God!’ I eventually got through.”

Howard said his goal is to help as many students as possible to avoid that transitional shock.

To that end, students lived in Pontchartrain Hall to get a feel for dorm life, attended lectures from faculty members who teach first-year courses to gain an understanding for course expectations and met with other STEM majors. They also took exams to gauge academic strengths and weaknesses and to help students understand what it takes to have a successful career in a STEM field.

Several of the scholars, like J.C. Rodgers of Keller, Texas, appear to have gotten Howard’s message.

“I enjoyed it,” said Rodgers who plans on majoring in naval architecture and marine engineering. “I got a chance to figure out what being in a dorm was like, and I remembered important skills for math that I probably would have had to figure out on my own the first day of school.”

Michelle Huang of Metairie, who plans to become a nurse, and chemistry major Lainey Smith from Shreveport, said the program not only helped them academically and socially, but gave them time to explore UNO’s campus.

“We got to run around the campus and now I know where things are, so I’m less nervous,” Huang said.

Said Smith, “I figured out how teachers will test, how many students would be in my major, and met some of them. That was really nice because it will help when we go into some of our classes and see some familiar faces.”

De’Monte’ Love of New Orleans, who plans to major in computer science with an emphasis on coding, was succinct in describing the allure of the STEM Scholars camp for him.