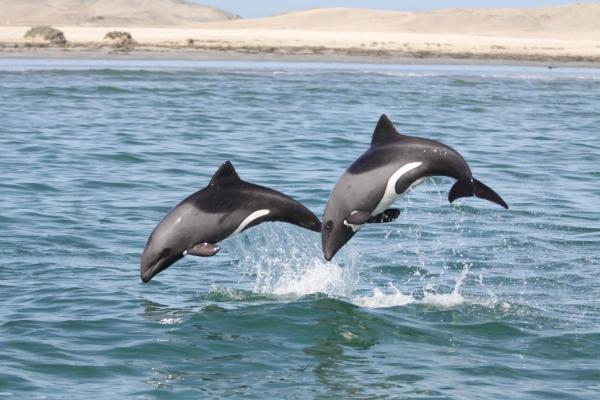 Research conducted by University of New Orleans alumna Morgan Martin is featured on this week’s cover of the flagship biology journal published by the Royal Society, the independent scientific academy of the United Kingdom. From a kayak off the west coast of southern Africa, Martin recorded sounds made by a little-studied species of dolphin and surprised experts with what she discovered by analyzing them.

Martin graduated from the University of New Orleans in 2010 with a bachelor's degree in biological sciences. Now a Ph.D. candidate at the University of Pretoria in South Africa, she has been based in Namibia for nearly three years. The focus of her research is Heaviside's dolphins, which are found only in the shallow waters along southern Africa’s west coast. Heaviside’s dolphins are some of the smallest on earth and they have not been extensively studied.

In addition to using sound for communication, dolphins and many other animals use sound to find things in their environment—like prey—in a process called echolocation. According to Martin, the prevailing idea prior to the study had been that dolphins were effective at avoiding detection because they can make sounds at a frequency so high that it is inaudible to their chief predators: killer whales. Instead, Martin found that Heaviside's dolphins selectively switch between cryptic, high frequency echolocation sounds used when they are searching for prey and lower frequency communication sounds which help to maintain their highly social lifestyle.

“Heaviside’s dolphins seem to be hunting and navigating using typical narrowband high-frequency sounds but use riskier lower frequency sounds when they communicate with each other,” explains Martin. These lower frequency clicks are risky to produce because they can easily be heard by killer whales, potentially increasing the chances that Heaviside’s dolphins end up as prey themselves.

Martin and her research team questioned why these dolphins would switch to signals that were more likely to be heard by predators when they could stick to a safer, higher frequency sound to better avoid detection. The answer has to do with how sound travels underwater.

“The lower frequency of these communication signals means that they are less directional and travel further underwater, so they are much more effective for social communication,” says Frants Jensen, a bioacoustics expert at Aarhus Institute of Advanced Studies and co-author of the study.

“So far, this seems to be the only dolphin species that selectively increases communication range by changing the way make sounds,” said Martin. The team’s initial paper on the research, “Heaviside’s dolphins relax acoustic crypsis to increase communication range,” was published in the July 18 issue of the Proceedings of the Royal Society of London B.

Martin and her colleagues had a chance to observe what they think the findings of this study illustrate. Shortly after seeing Heaviside’s dolphins socializing in a group, the research team saw a pair of killer whales attack and kill one of the dolphins. Perhaps it was the lower frequency communication within the dolphin group that alerted the killer whales to their presence.

While this study presents important findings about how Heaviside’s dolphins use a dual-sound strategy for foraging and communication, Martin emphasizes that there is still much to learn about what their signals mean.

“These dolphins communicate by emitting bursts of very rapid clicks (more than 500 clicks per second) at highly varying repetition rates,” she said. “We don’t yet know what information they can encode when they produce these sounds, but we are trying to find out.” Her next paper will link specific sounds produced underwater with surface behaviors to gain a better understanding of the function of different social signals used by Heaviside’s dolphins.