A Provost’s Passion: A Mathematician and Engineer Finds Outlet in Creative Writing 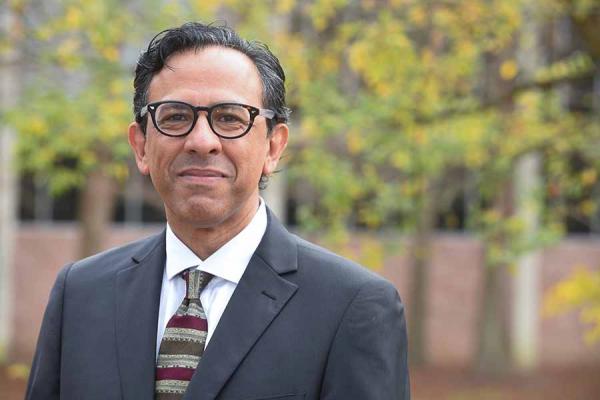 Mahyar Amouzegar has been writing fiction for most of his life. But until five years ago, few outside of his closest family members knew.

Instead, he spent the better part of 30 years building a career around math and engineering. He studied applied mathematics and electrical engineering through undergraduate and graduate school, obtained a doctorate in operations research from the University of California, Los Angeles, and created an impressive resume as an academic, researcher and senior policy analyst for RAND Corp.

He’s been a university dean and department chair, published more than 60 scholarly articles and, in 2017, joined the University of New Orleans as provost and senior vice president for academic affairs.

Yet nearly every day since he was about 13 years old, Amouzegar has spent part of his day quietly constructing imaginary worlds with words on paper and screen, a daily devotion to the art of the story that he says sprouted from his early love of reading.

“To me, coming home and writing fiction was just a way to get away from that math and policy,” he said. “It was just a private conversation between me and my characters.”

And by private, he means private. Over 20 years of marriage, Amouzegar’s wife, Maria Montero, expressed support for her husband’s writing. But it still took Amouzegar about 10 years to work up the courage to share the actual work with her.

All that changed two years ago, when Amouzegar published the first of two novels through the small publishing house Fountain Blue Publishing. In “A Dark Sunny Afternoon” (2016) and, “Pisgah Road” (2017), Amouzegar brings readers inside the lives of two men, each struggling to come to terms with their past amid present love and drama.

One colleague’s persistence led him to change his mind about sharing his work.

Sharon Hilles—then-dean of liberal arts at California State Polytechnic University, Pomona, where they both worked—had heard about Amouzegar’s private writing. So, she asked to see it. And asked and asked and asked. Amouzegar finally complied.

The manuscript Hilles sent back was life-changing for Amouzegar. Hilles had written all over his pages, expressing disdain for one character, surprise with another, and, in the process, gave the formerly secret author a level of feedback that he didn’t know he wanted until he had it.

Amouzegar is from Iran, the sixth of seven children born to a bookkeeper father and a homemaker mother. Neither of his parents had college degrees, but his father was a book-lover who worked for about 10 years at a publishing house and managed to keep the home stocked with literature.

“He would come home every night with a book,” Amouzegar said. “It was really nice.”

In 1977, at age 13, Amouzegar traveled to the United States with his 11-year-old brother. The pair were sent to live in California with their older sisters, both accountants in their 20s. As he remembers it, his parents were expected to follow soon after, but revolution was brewing in Iran and travel became difficult. The couple did not join their children for another five or six years, leaving Amouzegar to navigate teenage life in America without his parents nearby.

That’s when Amouzegar’s writing habit picked up speed. Every day, he would come home from school and write. The stories, he said, were just for him. He paid no attention to character development or structure. He just wrote.

He drew on his love of old movies, especially  screwball comedies of the 1940s like “It Happened One Night” and “His Girl Friday” and others in the film noir genre like “Double Indemnity” and “D.O.A.”   He read and re-read “The Godfather” and found himself inspired by drama, suspense and the subtleties of human interaction. In time, he grew to love Ernest Hemingway and Graham Greene, to write to the music of operas like “Aida,” after which he named one of two daughters. Writing, which he occasionally describes as his “first love,” always felt like a natural extension of himself, but not enough to quash the inner voice that told him this was never good enough to be shared.

Outwardly, Amouzegar exhibited an aptitude for math. It seemed more acceptable career fodder for a young man raised in a middle-class Iranian home.

“I can imagine that if my parents were here and I would have grown up here, I would have gone on to study history or writing or political science and I would have done social sciences or liberal arts,” he said. “But coming from the Old World, the expectation is that you’re going to be a doctor or engineer.”

In his pursuit of a master’s degree in engineering, Amouzegar discovered the world of operations research, an area of study that enabled him to tackle complex policy problems with the aim of arriving at workable solutions. It’s a field that marries abstract problem-solving with the skill of a mathematician.

And while Amouzegar has done a lot of professional writing as part of his work, he still looks forward to the time he gets to spend at home thinking imaginatively about what his character will do next. He writes, he said, one sentence and one day at a time. Today, much of that writing takes place on the balcony of the Marigny home that he shares with Montero.

Being provost—a position that requires oversight of the University’s faculty and academic programs—seems to allow him to call on all the muscles he has learned to exercise in a career as a mathematician and engineer and as an extracurricular creative writer.

“I think being creative, it allows you to think holistically about problems,” Amouzegar said. “It allows me not to think so algorithmically. I am very much aware of human nature and I think it helps with this job … I think it un-constrains your imagination.”

Amouzegar said he is continually juggling multiple stories and is currently seeking a new publisher for his next book.

Amouzegar was on WRBH Reading Radio as he reads from “Tell Me More,” a short-story published as part of an anthology of short stories released by Fountain Blue Publishing.