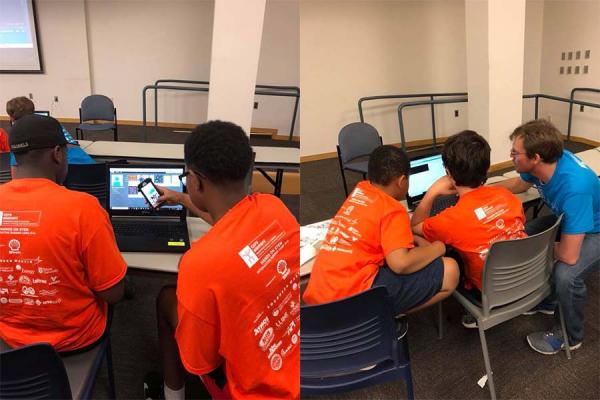 The University of New Orleans computer science department partnered with local nonprofit Core Element to host a hands-on coding camp for 23 students in grades 6-11. The weeklong program was organized and promoted by Core Element and hosted on the University’s campus June 18-22. Campers learned the fundamentals of computer programming and software design in a fun way, by building their own video games.

Core Element promotes STEM (science, technology, engineering and math) education in the greater New Orleans area through professional development for teachers and enrichment activities for students. The organization worked with the University of New Orleans to help recruit teachers for its fifth GenCyber immersive cybersecurity training program for high school teachers and will hold other summer camps this year for students focused on life science, electrical engineering and robotics.

“Last year's coding camp was such a huge success that we partnered with Core Element again to offer kids this exciting opportunity to learn how to develop software using industry tools while also inventing their own video games,” said Mahdi Abdelguerfi, chair of the University of New Orleans Department of Computer Science.

According to Abdelguerfi, video game programming is the perfect vehicle for getting kids excited about technology and math. Campers learn to develop their own game software using real-world technologies commonly used to create commercially released mobile and web-based games. Over the course of a week, the campers moved through the entire development process of designing, implementing and testing their own games.

Ted Holmberg, industry liaison for the UNO computer science department, served as camp director. Four UNO computer science majors served as code coaches: Stephen Marcel, Amer Sulieman, Chase Lirette and Caitlin Boyce. Over four days, campers worked in pairs to design and build two types of games. One game focused on dodging and the other was a side-scrolling platform game. A gallery of games created by campers can be viewed online here.

“A major objective for this camp was to teach the kids a new skill set they could continue to cultivate even after the camp was done,” Holmberg said. “I didn't want this camp to be an end of their coding experience, but rather a beginning.”

With a goal set to encourage campers to continue coding long after camp concluded, organizers employed popular open-source technologies—such as Piskel for artwork, Tiled for creating and editing game levels, and Phaser, a framework for programming game logic. With knowledge of these open-source programming tools, campers can continue progressing with support from online tutorials and active user communities.