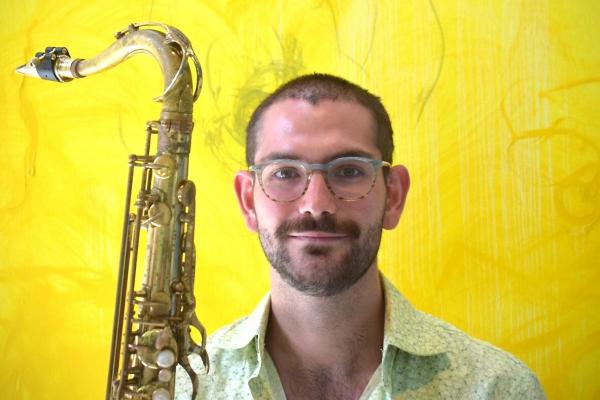 Tomas Majcherski, a composer and musician who is seeking his master’s degree in saxophone performance, has been named the recipient of the American Society of Composers, Authors and Publishers (ASCAP) Foundation’s 2018 Louis Armstrong Scholarship at New Orleans.

Majcherski moved to New Orleans in 2014 and joined the University of New Orleans in three years later. His roots as a musical artist and composer run deep.

Growing up on the east end of Long Island, NY, the son of a painter and a classical pianist, Majcherski was surrounded by art and artists as a child. He learned music in school and at home and, as a teenager, began to study jazz and improvised music with saxophonist Hal McKusick.

In 2007, Majcherski entered Columbia University, where he majored in philosophy. Following graduation, he traveled with a group of musicians to Kokrobitey, Ghana, where they studied and recorded with master drummer Okoe Ardifiyo and his ensemble Akrowa, in a collaboration called Okoemotion.

Since entering graduate school at the University of New Orleans, Majcherski has studied under saxophonists Ed Petersen and Brent Rose; guitarists Steve Masakowski and Brian Seeger; and pianist Lawrence Sieberth. He also studies with percussionist Hector Gallardo, with whom he plays in Hector Gallardo’s Cuban Jazz Band.

Seeger, associate professor of music at the University of New Orleans,  said the faculty is very pleased to see Majcherski selected for the honor.

“Like many of our graduate students in jazz, Tomas has brought a lot to UNO,” Seeger said. “His multifaceted music, arts and philosophy background, his fantastic saxophone playing and his thoughtful and kind demeanor add to the breadth and depth of our strong program.

Majcherski’s compositions span a range of musical styles, including pieces written for avant-garde theater, as well as some in the early jazz and ragtime styles. His current work focuses on modern jazz as a vehicle for improvisation in small ensembles.

“We look forward to watching his development here and beyond,” Seeger said, “and are glad that ASCAP will help support Tomas’ creative endeavors.”

Founded in 1975, The ASCAP Foundation is a charitable organization dedicated to supporting American music creators and encouraging their development through music education, talent development and humanitarian programs.