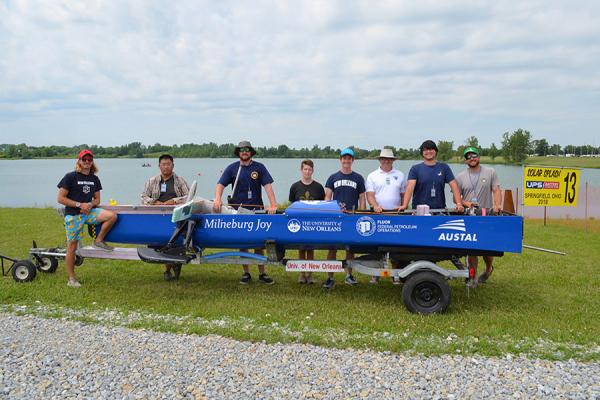 A team of University of New Orleans engineering students made a splash last week at Solar Splash, the world championship of intercollegiate solar/electric boating.

Following a seven-year hiatus from the event, the University of New Orleans returned to the regatta with Milneburg Joy, a sleek, Privateer-blue boat that took home two first-place awards in the five-event competition, held June 5-9 in Springfield, Ohio

Ryan Thiel, research engineer in the School of Naval Architecture and Marine Engineering and the staff adviser for the team, said it felt great to be back in the competition. Competing with teams from 11 other universities, the University of New Orleans placed first in the sprint and solar endurance competitions. It also took third overall and third place in qualifying.

“I hope it’s the start of us rebuilding this tradition,” Thiel said.

The University started participating in Solar Splash in 1996, bringing home a number of awards over the years, including first-place overall in 2010. Thiel said that student interest in the extracurricular event waned following 2011 in part due to student participation in paid internships. But when a group of motivated students approached him in the fall of 2017 asking if he’d consider getting involved it in again, Thiel was on board. Thiel first participated in the event when he was a student at the University in 2005 and went on to become the team’s adviser through 2011.

“We dominated the sprint competition for many, many years,” Thiel said. “And we were always finishing close to the top.”

He said the interdisciplinary nature of the hands-on project offers student engineers a great opportunity to apply what they have learned in the classroom. When designing a solar/electric boat that will move swiftly over long periods of time, naval architecture students must work hand-in-hand with mechanical engineering students and electrical engineering students to solve problems.

“This teaches the students how to communicate and work with engineers of different disciplines, an important skill in engineering,” he said.

When the team started working on the project anew in the fall of 2017, they formulated a new, exciting boat design. By the spring, it became clear they were running out of time to build the new vessel, so the team took the Milneburg Joy out of storage and began making modifications to the design in order to meet the competition’s updated requirements.

While the new boat—they’re still trying to come up with a name for it—remains in development, Thiel said the hope is to get it built, tested and in the water in time for the 2019 Solar Splash contest.

“We left the event with a lot of excitement,” Thiel said.

The team’s participation in the event was made possible by support from the College of Engineering, Fluor Federal Petroleum Operations, Austal USA and Deborah D. Keller & Partners.