Farmer to University of New Orleans Class of 2018: Know your own truth 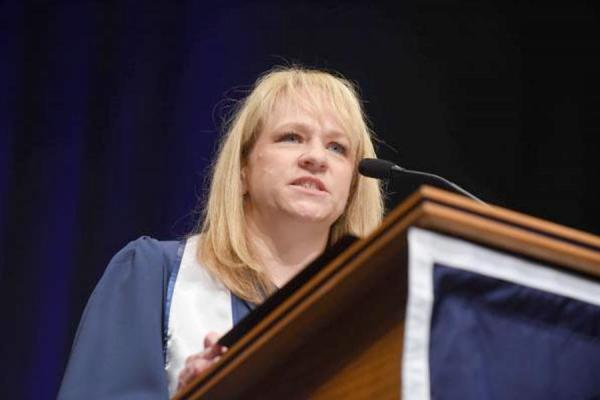 Twenty-three years ago, Google engineer Sabrina Farmer walked into the UNO Lakefront Arena wearing her commencement cap and gown with one memorable life goal: to make twice her mother's salary.

When Farmer received her degree in computer science from the University of New Orleans that day, she became the first woman in her family to graduate from college. Farmer had been raised one of four girls in a single-income household in Marrero, La. Her mother worked paycheck-to-paycheck. Success, she thought, would be making enough to live in an apartment where she would be able to follow her own rules.

Farmer told graduates that the fact that she was even getting a degree seemed like a stretch. She had been raised in a home where there were no computers, where college had not been a part of the plan for much of her life and where the commonly held belief was - as her best friend told her when Farmer disclosed her choice of majors - "Women don't like computer science."

Farmer ended up enrolling at the University of New Orleans after accompanying a friend to the campus and finding herself unexpectedly energized by the optimism and hope she felt on the campus of New Orleans' only public research university. She spent the next six months taking college entrance exams and applying to school, unsure how she would even pay for it.

"Overall," Farmer said, "I would say the expectations people had for me were not super high. But I still showed up - maybe because I didn't have a Plan B, but also because I wanted to know my own truth."

In an honest and often funny address, Farmer encouraged the graduates to move beyond the mindset of simple goal-setting exercises to include expanding one's self-reflection of what might be possible. "Don't accept what others say are your limits," she said. "Test your limits. Know your truth rather than letting someone else define it for you."

Some of the graduates seated in the arena listening to Farmer had already had their own limit-testing experiences. Monika Calderon, a music major from Guatemala, had endured radiation and 12 rounds of chemo following an unexpected diagnosis of brain cancer in her first year on campus. Jake Barron, a 29-year-old computer science major from New Orleans, had set out to start a second career after he discovered his first career in forestry wasn't his passion. Julie DeVita, 29, was completing her college degree 11 years after accumulating two years of credits at another university. "I'm proud to be a Privateer," DeVita said. "We're such a gritty bunch."

"Want to know what I did?" she said to those gathered in the arena. "I uttered a phrase I never would have imagined I would ever say. I said, 'I am overqualified for that position.' In that moment, I acknowledged my value, my work and my accomplishments. I realized I had to stop waiting for people to validate me."

Farmer visits the University annually, mentors female computer science students and sponsors travel grants for female technology students to attend technical conferences. Some of those students were seated in the arena.

"Tell your stories, good and bad," Farmer ended. "Share your journey and allow others to learn from you. The world is changing and with change comes opportunity. So I leave you with this piece of advice: Seek to find your limits. Test them. And crush them."

Also during the commencement, University of New Orleans President John Nicklow awarded an honorary doctorate to Paul Hinnenkamp, senior vice president and chief operating officer of Entergy. Hinnenkamp thanked his family and offered this advice to the graduates: "What you do regardless of your profession is very, very important," he said. "But it pales in comparison to how you do what you do."

The class of 2018, which included students from 25 states and 34 countries, turned their tassels, joined ranks of the 90,000-plus University of New Orleans alumni and second lined out of the arena, where hugs, joy and a brass band awaited.