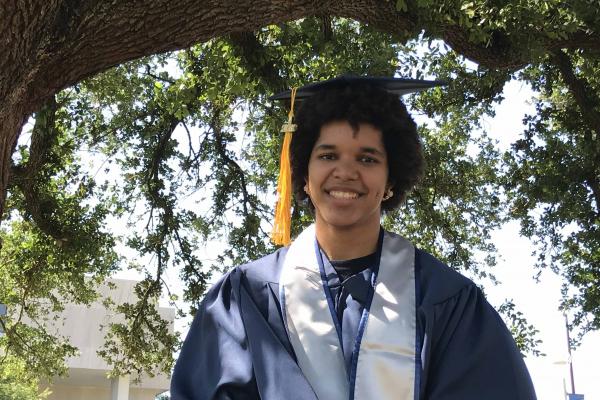 But as this 22-year-old New Orleans native prepares to graduate today with a bachelor of science degree and heads for doctoral study at the University of California Santa Barbara in the fall, she says she wouldn't trade the circuitous path she's taken to get here.

"Each major that I had and the classes that I took, I don't wish that I hadn't taken," she said. "I really loved all the journalism courses. I loved learning how to communicate in different ways."

A graduate of Helen Cox High School in Harvey, La., Dixon's main challenge in narrowing down her study and career options has always been that she has a wide array of interests and talents. She was an A-student in high school and entered the University of Southern Mississippi as a journalism major, even though she knew she had a passion for science. She'd always also loved English and writing, after all. But when she thinks back on it now, she says she believes self-confidence played into her decision.

"I was expecting that college was going to be the hardest experience in the world and thought that I wasn't going to be able to excel in the science courses there," she said.

Over the next three years, she switched her major to biology, had an eye-opening summer research opportunity in Arizona, transferred from University of Southern Mississippi to Georgia State University, switched majors again to environmental science, transferred to the University of New Orleans and then discovered the world of materials chemistry.

"Back when I was a kid," she said, "I would do Girl Scouts and we were always taught to leave a place better than you found it If we can find ways to make energy cheaper, more people will have the ability to travel and pursue different interests. If you make energy more accessible, you make education, travel and everything more accessible."

Dixon, who has been recognized by the Louisiana Section of the American Chemical Society as the Outstanding Senior in Chemistry from the University of New Orleans, says she has been grateful to learn from professors who are actively engaged in research.

And for anyone who, like her, is still struggling to nail down an elusive major, she has some advice.

"Be open to new experiences," she says. "Talk to people. Eventually, you will find something you really like. If you keep being open and trying to learn new things and doing your best at new things so that you can use it as a step up in your life, you're going to be ok."