Graduate Profile: With Determination and Grit, Cordell Williams Sets the Stage for a Career in Hospitality Administration 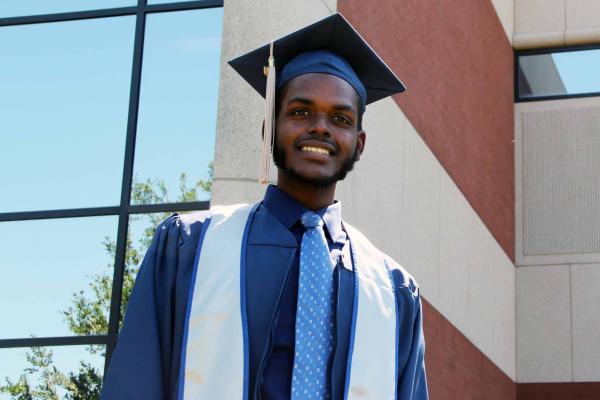 Cordell Williams graduates from the University of New Orleans Friday with a job in hand.

As one would expect, he's thrilled. Among the reasons: It will mean he can take a little break. Emphasis on the word "little."

For the past four years, this hotel, restaurant and tourism administration major has worked two jobs while navigating life as a college student in the city where he was born. When Williams crosses the stage at the UNO Lakefront Arena, he will be the first from his immediate family to graduate from college.

"The University of New Orleans has helped shape my vision of my future and what exactly I want to do," Williams said as he described his journey toward getting a bachelor of science degree from the College of Business Administration.

Williams already knew he enjoyed helping people iron out their customer service issues. Through high school, he worked at the customer service desk at Winn Dixie and spent hours outside of school working at the Superdome with Juma Ventures, a youth employment program that aims to empower young people from low-income homes with training and job opportunities. Williams' work ethic was clear even then. He was promoted from selling concessions to customers in stadium seats to being a youth manager, managing the products, money and payroll.

When he landed a scholarship to study HRT at the University of New Orleans, he continued working two jobs to help pay for his housing, food, clothes, transportation and more. He found on-campus employment at Pontchartrain Hall and, most recently, the Key and Card Access Center, while working at Smoothie King nearby.

Keeping up with classes was not always easy. There was a moment when his grades dipped as he tried to manage work and academics. But he said he found guidance and support in Kim Williams, associate professor and director of the University's HRT program. Kim Williams became his formal mentor through MoMENtum, a program that she helped spearhead in the spring of 2016 to provide support to African-American males enrolled at the University by pairing them with faculty and staff mentors.

Kim Williams said that, from the start, Cordell Willliams stood out for his drive, his infectious positivity and his eagerness to succeed. "He has the best attitude and his positive energy is almost contagious when you are around him," she said. "I know he is going to do great things."

She soon discovered that when Cordell Williams sought her advice, he also followed it. Hestrengthened his time management habits, climbed back into good academic standing and landed an internship with Walt Disney Parks and Resorts in the spring of 2017. Though he took college classes while he was in Orlando, Fla., he became concerned following his return thatthe time away on his internship might have compromised his ability to graduate within four years, as he'd planned.

He went to Kim Williams for advice.

"She whipped out my four year plan and my transcript and she immediately got me back on track," he said.

He completes his final semester firmly on the road to his future.

"I feel like when you set goals for yourself and you know where you want to be in a certain amount of time, you're going to do what you need to do," he said.

In March, Cordell Williams, now 22, learned he'd been selected for a competitive year-long paid management internship at Disney - one that he hopes will further lay the foundation for one day managing a resort. The job begins June 9.

While he's entertaining thoughts of perhaps working a second job, for now he's excited about taking a few weeks without so many balls in the air.

"I'm looking forward to taking a breather," he said.