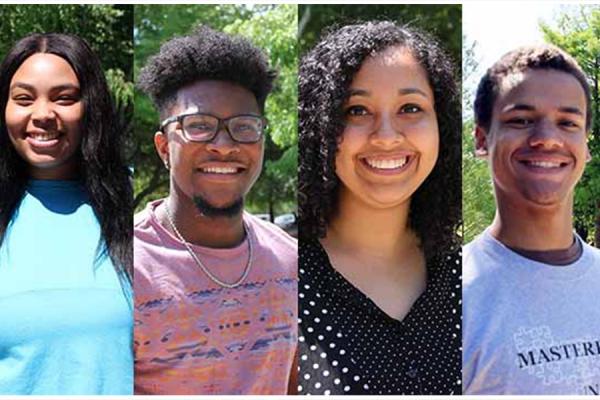 The UNCF/Koch Scholars Program was launched in 2014 through a $25 million grant from Koch Industries and the Charles Koch Foundation. The program seeks to foster an entrepreneurial approach to improving well-being for individuals, communities and society as a whole. To be eligible for the UNCF Koch Scholars program, undergraduates must be pursuing a degree in accounting, business, economics, engineering, history, philosophy or political science. Scholarship recipients are required to participate in an online learning community and attend an annual summit meeting.

Scott is a civil engineering major and a graduate of New Orleans Charter Science and Math High School. Her future plans include a master's degree in business and eventually owning her own company. A graduate of False River Academy in New Roads, La., Kador is a mechanical engineering major. He hopes to gain some work experience after graduating from UNO and one day run his own engineering firm. McNally spent most of his childhood in Belleville, Mich. but finished high school in Winston-Salem, N.C. Inspired by a lifelong interest in ships, he is now majoring in naval architectural and marine engineering and plans to pursue a career in that industry. Porter is a history major who graduated from Wossman High School in Monroe, La., who hopes to one day teach African-American history to students in the New Orleans area. Daigle is an accounting major from Donaldsonville High School in Donaldsonville, La., who plans to become a Certified Public Accountant. Compton is a philosophy major. Reid is an engineering major from Violet, La.

At the University of New Orleans, these students have the opportunity to receive mentorship from Chris Surprenant, associate professor of philosophy and director of the Alexis de Tocqueville Project, and will have access to additional resources for taking on enrichment projects through the Tocqueville Project. For example, students may have opportunities to initiate community activities that promote entrepreneurship locally or travel outside the region to attend conferences or participate in other relevant academic programs.