EMPLOYEE OF THE YEAR 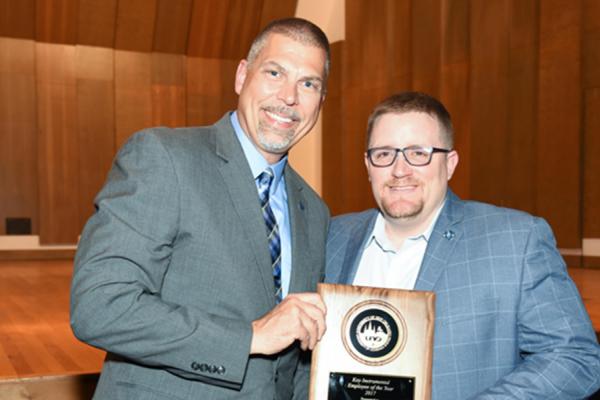 Privateers Head Basketball Coach Mark Slessinger has been named the University of New Orleans 2017 Service with Jazz Employee of the Year.The award is given annually to one person who demonstrates strong characteristics in work ethic, customer service, commitment, loyalty and motivation.

Slessinger, who joined the University in June 2011, led the men's basketball team to a conference championship in the 2016-17 season, making the University of New Orleans the only Louisiana school to participate in March Madness in 2017.

He is a tireless champion for all things Privateer and has become known as much for his coaching as his commitment to mentorship and volunteerism.

He was also honored with the Eddie Robinson Award by the Allstate Sugar Bowl Greater New Orleans Sports Hall of Fame, an award that goes to a sports figure who embodies the attributes of the legendary Grambling State football coach: excellence in athletics, academics, sportsmanship and citizenship.

President John Nicklow, who was present during the ceremony to present the faculty and staff awards, said he felt "compelled" to pause and give his gratitude to the University's employees for all that UNO is accomplishing.

"This institution turns 60 years old this year," Nicklow said. "And, yes, there have been times in our history when we've had more students and more state funding, but I doubt that there has been a time when we've had more optimism and more opportunities for success. The only reason I can say that is because of our dedicated and determined faculty and staff.

"You are what make us exceptional and you will help carry us to new heights. I have said this before and I will happily say this again. We are going to accomplish some amazing things together. In fact, we already have."

The 2017 Service with Jazz Employees of the Month winners were: