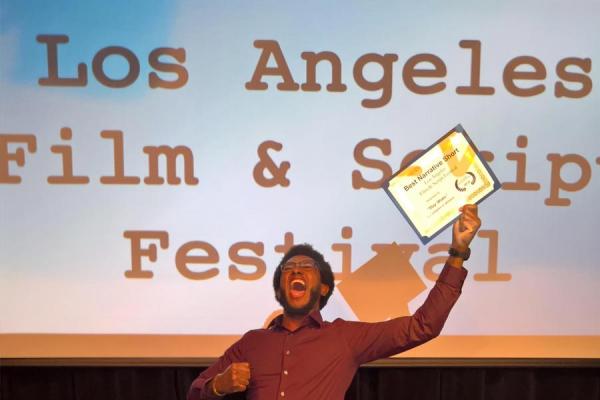 Langston Williams didn’t start off with a plan to make a social commentary as his master’s thesis film at the University of New Orleans. But the summer after Williams finished writing the screenplay for a horror short, a 37-year-old named Alton Sterling was shot by police officers in Baton Rouge.

Williams discovered then that he had an entirely different screenplay in him – one about race, police brutality and the media. “The story almost wrote itself,” said Williams (M.F.A.,’17).

Now, Williams’ 25-minute short film, “Stay Woke,” is racking up honors on the film festival circuit and, most impressively, has been invited to be screened at the Cannes Film Festival’s Short Film Corner on May 17, a first for a student film made through UNO’s Department of Film & Theatre program.

“It’s a huge deal for me,” said Williams, 29, who received his master’s degree in film in December and has spent the months since crisscrossing the country, picking up awards and visiting festivals in Los Angeles, Atlanta and Las Vegas. The last time Williams had a film he thought might be festival worthy, he submitted it to 70 festivals and received only six admissions.

Williams’ road to filmmaking hasn’t always been the smoothest. He said the first two films he produced in graduate school at UNO were “so bad” (his words) that some counseled him to reconsider the degree program. Williams said he took the criticism, but he parlayed it into something great.

It was the kind of growth that faculty love to see.

Laszlo Fulop, associate professor of film, was Williams’ thesis committee leader. He said Williams showed maturity, dedication and commitment to his development as a filmmaker over his three and a half years in the program: “He took all those comments very seriously and he said, ok, let me see how I can change.”

In “Stay Woke,” Williams uses an ensemble cast to explore police brutality through the lives of three characters – a young black man, a white police officer and a black politician – whose experiences leading up to the moment of tragedy reveal a more nuanced reality than Williams says he often sees depicted in the media. Despite the heft of the subject matter, the film also includes moments of humor.

“The layers of complexity in this film are amazing,” Fulop said. “I really would compare it to Spike Lee’s ‘Do the Right Thing’—but what is the right thing to do? People are both good and bad.”

Williams says his interest in what he calls “the gray” area of race relations likely stems from his personal experience. He grew up in Gulfport, Miss., where, until the third grade, he attended a school where he was the only African-American student in a sea of white. Though he had many friends in the early grades, he said, he started to feel increasingly isolated as he approached the sixth grade. In middle school, he said, he and his mother moved to Zachary, La., where he enrolled in a school where the race dynamics were the polar opposite. “I didn’t fit in,” he said. “I had been so used to being around other kinds of people.”

By the time he was in high school, Williams said he had an ability to see the world from multiple perspectives—an asset for anyone in the business of storytelling.

Williams holds a bachelor’s degree in mass communications from Southern University. It was there, he said, where he became inspired by Spike Lee after the legendary film director made a visit to the campus. While at UNO, Williams was selected for the prestigious “NCIS: New Orleans” internship made possible through a collaboration with between the locally-filmed TV show and the university.

Williams said his first love has always been horror films. When the “Stay Woke” festival tour is over, he plans, among other things, to return to his home in Metairie, La., and work on making his original thesis screenplay – that horror flick that he tossed after the events of the summer of 2016 – into a feature-length film.

The film screens at Cannes on May 17 at 3:30 p.m. Williams said he hopes to be there. Meanwhile, locals will have a chance to see “Stay Woke” on May 13 during the UNO Film Festival here at the University of New Orleans.