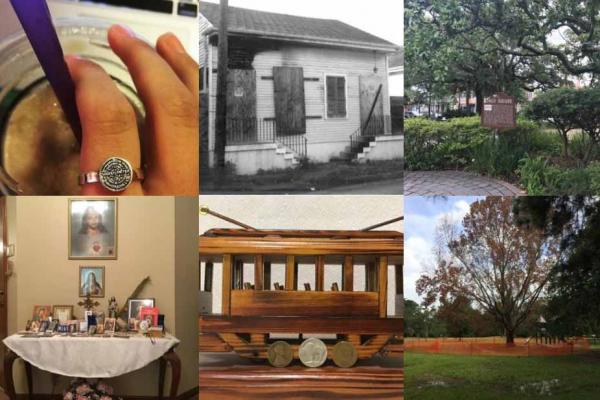 One New Orleans woman shared a photo of the only ring she wears, one passed down from her great-grandmother who lived a short time in France before dying in childbirth. Another sent in a picture of the warm, corn-based arepas, a staple of her former life in Venezuela. Daniel Senentz Jr. photographed a nickel and two pennies, the fare his grandmother remembers paying to travel on the streetcar as a child in New Orleans in the 1950s.

"As a port city," Mitchell said, "New Orleans has a long, complex history of cultural interaction between diverse populations, including indigenous groups and peoples from around the world. From everyday objects to historical artifacts, recipes to family portraits, our gallery is a repository for the personal histories of the city's residents and how they - or their ancestors - made New Orleans home."

The project is in keeping with the Midlo Center's mission of community engagement in that it captures the diversity of experiences within the history of New Orleans by asking the public to contribute their stories or their family's stories of migration and immigration to the city, Mitchell said. When New Orleanians contribute their stories to the Midlo gallery, these will also be added to the national site.

"Your Story Our Story" is funded in part by the National Endowment for the Humanities and the Institute of Museum and Library Services. Its aim, according to the Tenement Museum, is to "uncover the patterns that bind us, no matter where we came from or how long we've been here."