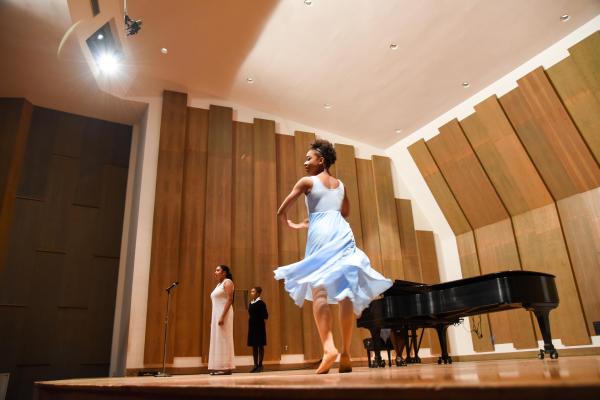 A microbiology student stood before her poster and shared her research on the use of bacteriophages to fight drug-resistant bacteria. Another walked on stage, tucked his violin under his chin and performed a complicated sonata for solo violin by Belgian composer Eugene Ysaye.

In classrooms throughout the University of New Orleans Earl K. Long Library, students presented work ranging from an oral history of the 2015 Grand Theater mass shooting in Lafayette to research into feral pigs to an exploration of college students as consumers of fake news - and so much more.

"You've inspired me today," said Jim Henderson, president of the University of Louisiana System, addressing the students and their faculty mentors during a luncheon. "It has been absolutely amazing. I wish that I could pick this up and take it to the rotunda of the capitol in Baton Rouge."

Callie Scull, a senior at Nicholls State who came to the university from Las Vegas, said the invitation to present her work at the University of New Orleans this year was incredibly exciting.

"It's honoring," said Scull, standing before a poster describing her research into antibiotic resistant bacteria. "It's getting to teach people about something that they might not know about. It's like getting to be a tiny teacher at a conference like this."

The summit opened with student performances at the Performing Arts Center.

Jonathan Andino, a junior at Northwestern State University, shared a violin solo by composer Eugene Ysaye. He said that when his mentor, Andrej Kurti, asked him to travel to New Orleans for the event, he was honored. Once here, he said, he was impressed to hear and see what students across the state are doing in their studies.

"I've been watching all my colleagues giving their presentations," he said. "They're amazing."

University of New Orleans President John Nicklow, who made expanding research one of his top three priorities when he was named president two years ago, said research and creative output are "an integral part of our heritage." Under Nicklow's leadership, the university launched the Center for Undergraduate Research, which facilitates collaboration between undergraduates and faculty, promotes undergraduate research both internally and externally, and it encourages new initiatives to create and enhance undergraduate research opportunities.

"We believe strongly in the role that research plays in the lives of our students and faculty," he said. "Research makes professors better teachers and it also improves student engagement and retention."

Nicklow joked that the event had him "geeking out" a bit: "I love it and I believe in it, and I'll always be a researcher at heart."

The 2019 event will be hosted at Grambling State University.