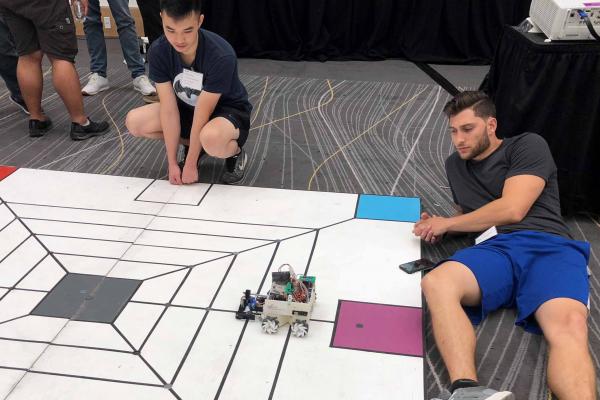 Teams made up of students from the University of New Orleans swept first, second and third place at an annual robotics competition hosted by the Institute of Electrical and Electronics Engineers (IEEE). The competition took place April 6-8 in Austin, Texas during the IEEE Region 5 annual meeting.

In all, 30 University of New Orleans students participated. Half of them were electrical engineering majors and the other half were from computer science, mechanical engineering and fine arts programs. Five of the six teams competed in the robotics category, and one team competed in a separate event focused on professional ethics. UNO teams also finished in fifth, eighth and 10th place.

The robotics competition required teams to design and construct autonomous robots that could repeatedly pick up a metal token, determine its color and deliver the token to a specific location based on the token's color. Scoring was based on how many tokens each team's robot could place correctly within five minutes. Only 11 robots, six of them from UNO, placed at least one token in the correct place.

Beyond the robotics contest, another team of UNO students competed in a professional ethics challenge. Nishant Dhungel and Dominic Traina used the IEEE Code of Ethics to analyze a case study and were scored on a presentation defending their findings.

Jeff Gray, coordinator for UNO's Department of Electrical Engineering, and Edward Holmberg, faculty adviser in UNO's Department of Computer Science, served as advisors to the competing teams and accompanied the students to the IEEE meeting where the competitions were held. Also in attendance at the IEEE meeting were electrical engineering department faculty members Ittiphong Leevongwat and Edit Kaminsky Bourgeois.