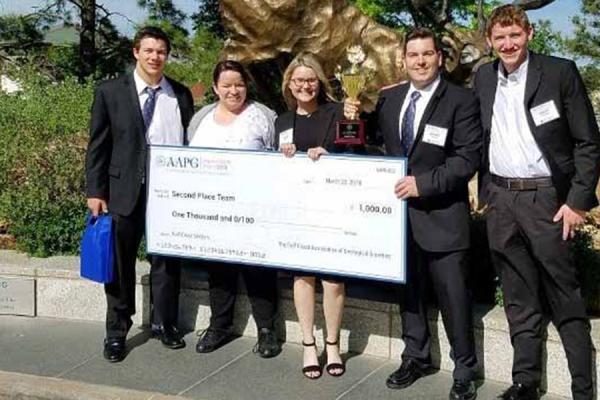 A team of University of New Orleans students placed second in the 2018 Gulf Coast Regional Imperial Barrel Competition, which was held March 22-23 at The Woodlands, Texas headquarters of energy company Anadarko, an event sponsor. Organized by the American Association of Petroleum Geologists, the annual contest is designed to simulate the collaborative and creative nature of working in today's energy industry.

"I couldn't be more proud of the University of New Orleans team," said Brad Robison, adjunct professor and faculty adviser to the team. "Not only was their presentation to the judges outstanding, they were exemplary representatives of the University. They conducted themselves with great poise and confidence in their abilities.

"This kind of competition is important because it provides a venue for students todevelop interpersonal and presentation skillsimportant in the working world," added Robison. "I am pleased to see our students excel in that respect as well as the technical aspects of the contest."

Students enrolled at Louisiana's public universities bested teams from all the participating schools in Texas and Alabama with the University of Louisiana-Lafayette team taking first place in this regional, semi-final round. First place teams from a series of regional contests go on to the worldwide competition in May.

The premise of the competition is that each team is functioning as a business unit within a petroleum company charged with technically evaluating a potential new venture. Eight weeks prior to the local competition, university teams receive geological, geophysical and other data relevant to petroleum exploration. They spend eight weeks analyzing the data and preparing their recommendation. The competition happens when these teams convene for 25-minute presentations to a panel of judges composed of expert geoscientists from major petroleum companies.The judges select a winning team based on technical quality, clarity and originality of presentation as well as the team's ability to answer questions. The winning teams receive cash awards for their universities, and all participants gain the experience of using state-of-the-art technology on a real data set and receiving feedback from an industry panel.

The "Barrel Award" has been part of a course at Imperial College in the UK for many years. The original program started there in 1976 and was focused only on the North Sea. The American Association of Petroleum Geologists adopted the program in 2007 and expanded the competition model to include students and exploration areas from all over the world.