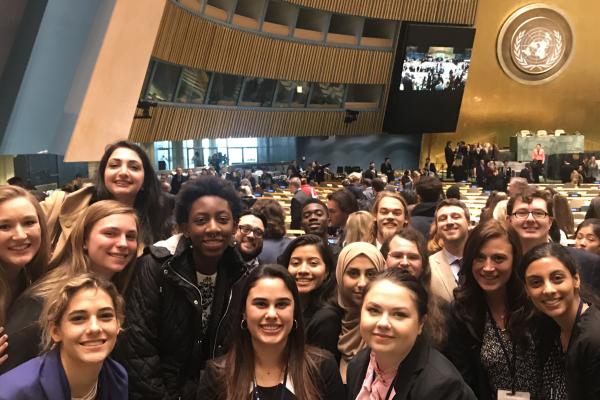 Representing the West African country known as the Republic of The Gambia, the students spent five full days immersed in discussion of global issues, including international migration, cybersecurity, sexual exploitation, pollution and marine life, instability on the Horn of Africa and halting the use of chemical weapons.

Fueled sometimes by pizza and granola bars, the students kept a schedule that had them going from morning until night. As in past years, their work stood apart. The team won a "Distinguished Delegation" award, given to only 36 delegations out of approximately 200 total participating and considered the second highest honor awarded at the event.

Over the past nine years, UNO's delegation has enjoyed a consistently strong record of participation in the National Model UN conference, taking home awards for each of the last eight years.

Milan Holman, president of the UNO Model UN club, said this year's delegation was inspiring in that it drew on the talents of students from many different backgrounds and experience levels.

Holman, a third-year film major from The Netherlands, said the Model UN experience brings together academic rigor, teamwork and international study in a way that builds empathy and strengthens an understanding of the world and one's self. Holman became involved in the club last year for the first time.

"It's such a unique experience to get to know a country like this," he said.

More than 50 students from UNO applied for those 18 spots. Selection requires students to go through an interview with a panel of the club's officers. Students who are chosen are also required to take a three-hour spring semester class called Model United Nations during which the faculty sponsor and club veterans oversee course topics that include background and history on the nation they will be representing. This semester, they also received guest lecturers by two experts with intimate understanding of the political climate and history of Gambia and Senegal.

James Mokhiber, director of international studies and adviser for Model UN, said he was impressed by the group's performance in New York. "We had a great mix of veterans and newcomers," Mokhiber said. "The solidarity within the delegation was inspiring."

Mokhiber assumed leadership of the Model UN Club following the retirement of John Hazlett, professor of international studies, who retired in January and who started the Model UNO program on UNO's campus nine years ago.

"I was impressed by how much John Hazlett had created," Mokhiber said. "Even though he is retired, his presence is still very much felt."

While in New York, the students had the opportunity to attend a reception sponsored in part by the UNO Foundation, where they were addressed by Lamin Faati, deputy permanent representative of the Permanent Mission of the Republic of Gambia. In addition, they attended a delegation dinner at Cafe Rue Dix, a Senegalese restaurant in the Brooklyn neighborhood of Crown Heights.

The trip was funded in part by donations received through a crowdfunding effort coordinated by the UNO Foundation. More than 50 people donated $7,000. University of New Orleans President John Nicklow matched every dollar raised with three from his office. The College of Liberal Arts, Education and Human Development and Dean Kim Long were also major donors.

Holman and Mokhiber encouraged any student with an interest in travel and global matters to apply, regardless of academic discipline. The virtues of the experience are extensive, Mokhiber said, and include opportunities to work on collaboration, organizational skills, writing, research and more.