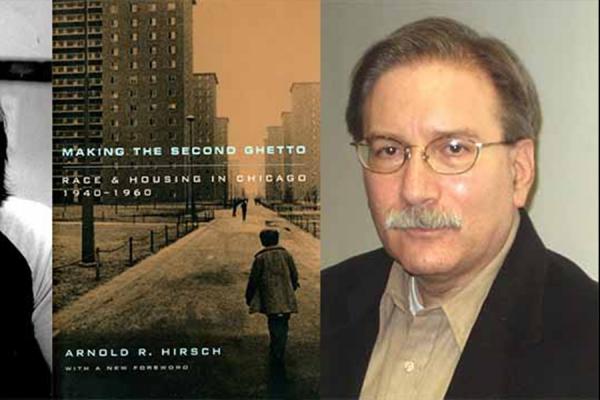 Arnold R. Hirsch, a University of New Orleans history professor for 31 years, passed away on March 18 at age 69. Between 1979 and his retirement in 2010, Hirsch's roles at the University included serving as the Ethel & Herman L. Midlo Endowed Chair and director of the Midlo Center for New Orleans Studies. Known as "Arnie" to colleagues, Hirsch leaves a legacy at the University of steadfast commitment to making history accessible to the masses.

Hirsch was born and raised in Chicago, earning a bachelor's degree and doctorate at the University of Illinois. He is best known for his ground-breaking book "Making the Second Ghetto," in which he catalogs the myriad societal and institutional forces at work ensuring racial segregation in Chicago housing during the decades following World War II. His research for the book began in the aftermath of Chicago riots that followed the 1968 assassination of Martin Luther King Jr.

At the time of its publishing in 1983, the book made big waves in academia. Thomas J. Sugrue, professor of social and cultural analysis and history at New York University, says the reason was Hirsch's willingness to challenge recent history, the post-World War II era in particular. Sugrue says the approach was unusual among most historians at the time.

"Arnold Hirsch was one of the most important scholars ever to teach at UNO," said Mary Niall Mitchell, who currently holds the Midlo Endowed Chair and serves as co-director of the Midlo Center for New Orleans Studies. "His work was foundational to the field of 20th century urban history. Even though 'Making the Second Ghetto' was about Chicago, it gave him a framework for studying the politics of race and racial discrimination that was vital to understanding the history of New Orleans. The book 'Creole New Orleans,' which he co-edited with his colleague Joe Logsdon, is still indispensable.

"The Midlo Center is proud to have supported the work of a scholar whose ideas are still vital to today's political debates and the writing of Ta-Nehisi Coates and others,"Mitchell said.

Connie Zeanah Atkinson, co-director of the Midlo Center, remembers that Hirsch had an enthusiam for civil rights. She said she sensed that he believed he had a responsibility as a historian to share knowledge of history. Hirsch's motivation, she believes, was bringing awareness and understanding of the past so that people could be empowered to change the things that were wrong about it. Atkinson said he displayed strong convictions about "no watered-down history."

"He encouraged his students to challenge old notions. Only when people understand how things got the way they are can they begin to deconstruct them," she said of his drive to educate.

After gaining notoriety for his incisive knowledge about Chicago, Hirsch would embrace the role of bringing the history of New Orleans to its people just as passionately. Under Hirsch's leadership, the Midlo Center for New Orleans Studies sponsored a robust lecture series covering topics in New Orleans history ranging from the state of education during the time of Thomas Jefferson to George Porter Jr. offering insight on how to "Funkify Your Life." The series resulted from Hirsch's decision to open up a University of New Orleans class on New Orleans history to the public. Hirsch became aware of a spike in hunger for local history after Hurricane Katrina. He met that interest by sharing the knowledge that was in demand.

The success of the lecture series led to a partnership with the Louisiana State Museum to hold a monthly public lecture at the Cabildo. Hirsch was also involved in the collection of oral histories, including that of Ernest N. "Dutch" Morial, the first African-American mayor of New Orleans.

"When we evaluate projects to determine whether the Midlo Center should have a role, we always have Arnie and his goals in mind," Atkinson said.