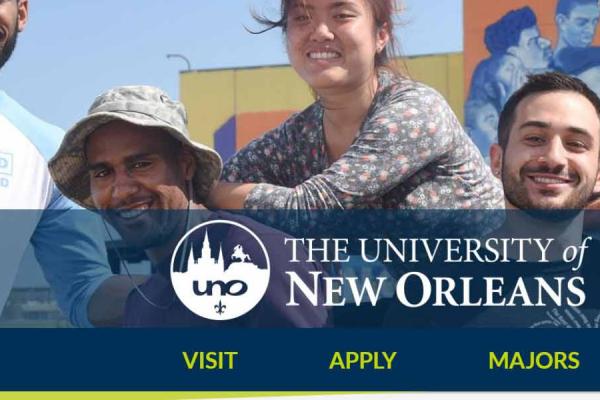 Using images and information that authentically convey the experience of being a part of UNO, the new website includes a number of features that will make it easier for future students and other key constituents to explore their potential at New Orleans' only public research university.

President John Nicklow prioritized the University's website redesign shortly after taking the helm as UNO's seventh leader in 2016. The website underwent its last redesign in 2012.

"The redesigned site will present the University of New Orleans brand - its messages and visual identity - in a more consistent manner," Nicklow said. "We will depend on our website to help us tell our story more effectively and persuasively."

Six years is a long, long time in the digital world, said Michael Esordi, associate director of web strategy for UNO, who joined University Marketing in June with the No. 1 mission of overseeing the creation of a new website.

Esordi worked closely with web developers Christopher Snizik and Chad West to make the project a reality. Through the process, the team solicited feedback and involvement from faculty, staff, students and alumni. More than 760 people responded to an initial survey about the website's needs and opportunities. Over the subsequent months, a 10-person advisory committee met monthly about the project.

Wednesday's website unveiling represented the first in a three-phase project that will requireongoing work moving forward, Esordi said. The first phase involved the redesign of the pages that are most relevant to future students, including the homepage and more than 100 pages that tend to capture the most web traffic, Esordi said.

The second phase will involve campus contributors from all four colleges with the goal of better highlighting and featuring the information that is most useful for visitors to those pages. In addition, the web team will be revisiting the University's strategic use of web-based analytics to determine how it can best serve website visitors. The third phase involves bringing into the system any websites that are affiliated with the University but live on external sites, such as UNO Press, for example.

Esordi said the goal is to continually improve and update the website moving forward. The University plans to move all uno.edu web pages from their current content management system of Omni Update to Drupal in June. He credited the University's resourceful and imaginative community with making the redesign possible.

"This truly is everybody's site," he said.