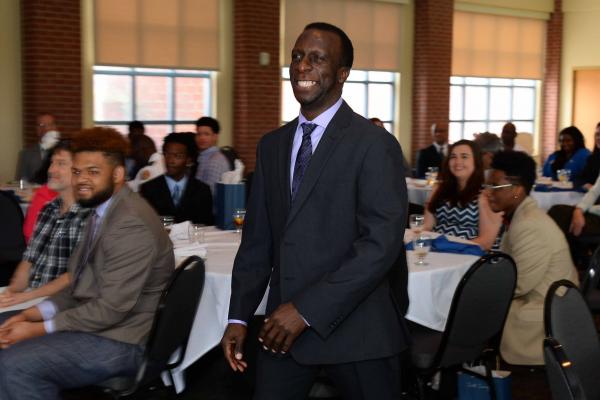 David Njite, a beloved faculty member who was known for making key connections with students in the Lester E Kabacoff School of Hotel, Restaurant and Tourism Administration, has died following a sudden illness. He was 53.

Originally from Kenya, Njite joined the University of New Orleans in 2012 as assistant professor of hotel, restaurant and tourism administration. He held a Ph. D. in human nutrition and food management from The Ohio State University and was on faculty at Oklahoma State University before moving to New Orleans.

At UNO, Njite distinguished himself as both a researcher and advisor. His research emphasized a multi-disciplinary approach that applies several aspects of psychology to investigate and explain consumer behavior in the hospitality and tourism context.

But Kim Williams, professor and director of the Kabacoff School, said, more than anything else, it was Njite's passion for student development that stood apart. When in 2016 the University launched MoMENtum, a program designed to pair African-American male students with faculty and staff mentors, Njite enthusiastically signed up and remained a committed mentor through the program ever since.

"The students loved him," Williams said. "He cared so much and he did anything to help them."

Senior HRT major Jasmine Devonne Jackson said she was struggling, like many, with news of Njite's passing. He was funny and upbeat, she said. He told corny jokes and delightful stories.

"I know I am not the only life Dr. Njite touched," Jackson said. "He was an incredible educator, an honorable mentor and a good friend. Dr. Njite molded futures and never failed to go out of his way to help his students become more successful. There was nothing he did half-way and that is something that will never go unnoticed."

He was twice recipient of the "Best Paper Award" at the International Council on Hotel, Restaurant, and Institutional Education (ICHRIE) and his work has been among the finalists for the Cornell Quarterly Award for the "Published Article of the Year." He has also received the prestigious W. Bradford Wiley Memorial Research Award for Research, which honors a superior publication on a topic relevant to field of hospitality or tourism management.

Besides his scholarly work, Njite also was a jovial colleague, Williams said. When he arrived in the mornings, he often would sing out his greeting - "I'm here! Whoooo's home?" Then, he would make his rounds through the floor, asking his colleagues how they were. He usually appeared in class wearing a suit and tie, Williams said, and he was a stickler for keeping his commitments.

On the occasions when Williams traveled with Njite to academic conferences, she said, people would line up to tell him hello. The bonds he'd formed while advising doctoral students seemed to stand the test of time, she said - his former students made it clear they enjoyed reconnecting with him.

"He was a positive energy but also a huge inspiration," said Kristyn Williams, a senior HRT major at UNO. "He believed far more in his students, especially in me, than we ever did in ourselves."

A memorial honoring Njite's life was scheduled for May 1 at 12:30 p.m. in the atrium of Kirschman Hall. A second-line and reception was to follow.