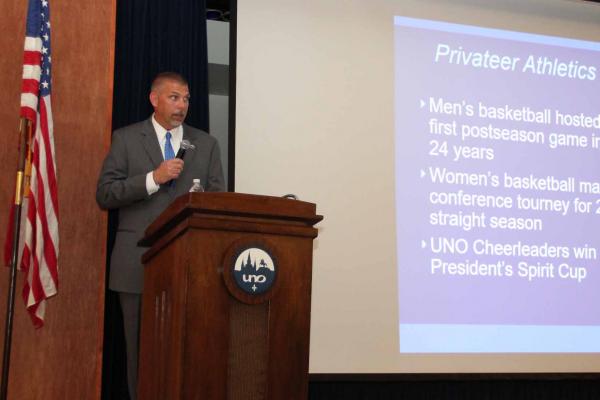 The University of New Orleans is making significant progress toward increasing enrollment, bolstering research and improving community and business partnerships.

That's the report University of New Orleans President John Nicklow gave during his biannual State of the University address before UNO faculty and staff Thursday afternoon.

Year over year since 2017, he said, freshmen applications to the University of New Orleans are up 26 percent as of March while freshman admits have risen 53 percent by 700 students. When graduate school applications are factored in, total applications have risen by 17 percent and admits are up by 51 percent, he said.

"So how are we finding success in reaching prospective students?" Nicklow asked. "We are not introducing ourselves to students for the first time in the fall of their senior year. We are engaging much earlier and more regularly with them."

Recruitment efforts start 18 to 36 months prior to a prospective student's graduation. The University has made it a priority to strengthen its relationships with high school guidance counselors. Expanded digital and print marketing efforts are doing a better job targeting students, especially in areas where recruiters are traveling at any given time.

"With your help, we are on track to meet our goal of 8,500 students," Nicklow said. "But what happens between now and August is critically important."

Nicklow encouraged employees to be brazen about sharing their pride for the university: "That kind of individual recruitment is a tremendous force multiplier," he said.

There is much to boast about.

In the past month alone, the University of New Orleans announced two $1 million grants, including one from an anonymous donor that will modernize and upgrade three chemistry labs. Another will pay for efforts by the University's Center for Hazards Assessment, Response and Technology and local partners to hold series of roundtables designed to address global climate change.

Student retention efforts are bearing fruit. In fall 2017, 81 percent of full-time freshmen taking their first math class had a grade of C or higher, up 10 percentage points from the year prior. In addition, average freshmen class GPA is higher than the year before, from 2.58 in 2016 to 2.76 in fall 2017.

"At the end of the day, enrollment isn't just about numbers," Nicklow said. "It is about the lives we change, the students we serve. Each of us plays a role in that effort."

Grants for sponsored research have increased increased 37 percent in the second quarter, he said, from 1.6 million in 2017 to $2.2 million in 2018, with the number of proposal submissions up 11 percent.

Also growing is the University Foundation's endowment, which has risen more than $8 million in a year to $74.9 million as of December. Much of the funds raised last year went exclusively to student scholarships and support.

"It was not very long ago when the University raised only between a half-million and a million dollars a year," Nicklow said. "Those days are over."

By this time next year, Nicklow said, UNO will be engaged in its first comprehensive fundraising campaign.

Alumni engagement is also getting stronger with successful events like UNO25, which recognized 25 high-impact businesses owned or led by UNO alumni, and an upcoming UNO Hall of Distinction that will seek to recognize those who have been influential leaders throughout the University's 60 years.

Nicklow, who was named UNO's president in March 2016, also touched on some of exciting external partnerships that have developed, including that with DXC Technology, an IT services firm and $25-billion company that is bringing 2,000 new high-quality jobs to New Orleans. UNO is one of the universities around the state partnering with the company to increase the numbers of degrees awarded in areas DXC needs.

"My theme this year has been pride," Nicklow said. As such, employees and students will see a number of improvements in addition to recent efforts to expand employee wellness programs. These include the launch of a new University website redesign, extended library and dining hours, resurfaced streets and power-washed buildings and walkways and more.

Nicklow ended his address by thanking employees. "All that we are able to accomplish is only possible because of your determination and your devotion to serving our students," he said. "Those attributes are rare and valuable and they are what makes the University of New Orleans such a spectacular asset."