Young and Outraged: New Orleans Civil Rights Movement Heavy-Hitters Reflect on the Experiences That Shaped Them and Changed New Orleans 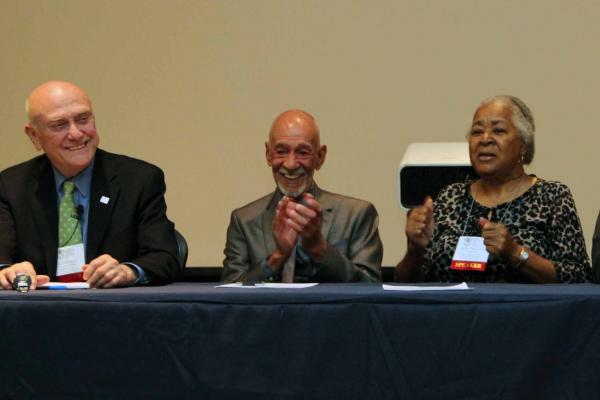 It was an isolating experience to be the first black undergraduate enrolled at Louisiana State University.

The year was 1953 and Alexander P. Tureaud Jr., who was assigned to an un-airconditioned dormitory under Tiger Stadium, says he frequently found himself commiserating with Mike the Tiger over their shared captivity. Tureaud's father, an attorney for the NAACP, had filed a lawsuit to enable his son to attend the university, which appeared to offer the best education at the time.

Beside Tureaud were Raphael Cassimere Jr., UNO professor emeritus of history who received his bachelor's and master's degrees from UNO, and Doratha "Dodie" Smith-Simmons, who became active with the NAACP Youth Council and the New Orleans Congress of Racial Equality when she was a teenager.

All three speakers reflected on how it came about that they emerged as youth activists during a time when African-Americans were shunned by white society, law and common decency. One thing in common, said Cassimere, was the influence of mentors like Jesse O. Richards, Jr., principal of Joseph S. Clark High School, which in 1947 became the second high school in New Orleans to open up to African-Americans.

"The two things he stressed were dignity and discipline," Cassimere said, recounting how many of the city's civil rights leaders, including himself, emerged from this high school with the sense that there was something to be done: "When we left Clark, we left with the feeling that we could do something,"

Cassimere went on to lead the city's NAACP Youth Council and, in 1971, became the first black instructor hired at UNO, then called Louisiana State University in New Orleans.

Dodi Smith-Simmons was 15 years old when she first got involved in civil rights demonstrations. She found herself picketing and staging sit-ins at McCrory's and Woolworth's before joining the Freedom Riders in what became often-violent demonstrations against segregation. Smith-Simmons said that her youth was an asset, both spiritually (she had a level of fearlessness that can wear off with age) and practically (there were times when her age shielded her from arrest.)

Tureaud's activism took shape under the influence of his father, Alexander P. Tureaud, Sr., an attorney for the NAACP and the only practicing black attorney in Louisiana from 1937 until 1947. Many New Orleans landmarks are named for the elder Tureaud, who fought to end segregation in all of its arenas and was successful in his charges to obtain equal pay for Louisiana's black teachers and admission of students of color to state-supported professional, graduate and undergraduate schools.

But in the 55 days that the younger Tureaud attended LSU before being forced out amid additional court action, one of the most memorable moments was one of unexpected grace.

Tureaud said he was seated on a bench near the stadium when a man in a truck pulled up and asked if he was A.P. Tureaud Jr.

Tureaud, who had become accustomed to being harassed, was suspicious. But he confirmed his identity as the man introduced him to his 7- or 8-year-old son, a child with skin the color of Tureaud's.

"I wanted him to see you here," the man said of his son, "so that he knows he can come to this school."

Tureaud appeared to choke up Sunday as he relayed the encounter, one he's told in public before: "I'm trying to get out of here," Tureaud said he told the man and his son, "and you're making me stay because I have become a symbol for what we should not have to fight for."

University of New Orleans Jazz at the Sandbar Returns October 5

The fall 2022 Jazz at the Sandbar concert series kicks off Wednesday, Oct. 5 at 7 p.m. at the University of New Orleans.  Read more