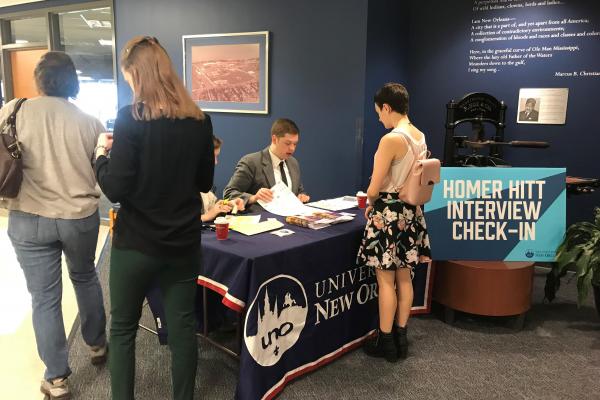 Nearly 400 future University of New Orleans students visited campus Saturday for a chance to learn more about New Orleans' only public research university and, in some cases, to compete for scholarship dollars.

Explore UNO, the University's annual spring open house, drew more families than ever before, with an estimated 868 visitors participating, including 67 incoming freshmen who interviewed in person for the prestigious Homer Hitt Scholarship and 24 President's Scholarship winners who competed on-site for additional scholarship dollars.

"It's students like you who make a university what it is," University of New Orleans President John Nicklow told the Homer Hitt interviewees, who were among 80 students total vying for the four-year $65,716 scholarship available to students with at least a score of 30 on the ACT, 1400 on the SAT and a 3.5 GPA or higher.

Hannah King, 17, of Mary G. Montgomery High School in Mobile, Ala., said she identified UNO as her goal school both because of the strength of its film program and its distance from home. She said she also was pleased to get face-to-face time with Kevin Graves, senior associate dean in the College of Liberal Arts, Education and Human Development, at a Friday night reception at The Cove, during which he was able to answer the film questions she had.

"She's rocked everything she's ever wanted to do and I have no doubt she'll rock this, too," said King's mother, Tina Wolstenholme, as her daughter disappeared down the hall for a formal interview with faculty.

Throughout the day, future students familiarized themselves with UNO's campus on guided tours. They spoke with faculty and staff from the University's academic programs. They heard from financial aid experts and talked to students about the more than 120 student-led organizations on campus.

At the Earl K. Long Library in the afternoon, 24 students who had already been awarded the $20,000, four-year President Scholarship, met together for a new and fun challenge that afforded them the opportunity to win additional scholarship dollars.

They split into three groups of eight and were given a challenge and roughly an hour to come up with a solution and presentation in response. Their task: Inventing an environmentally conscious method to lessen the impact of Mardi Gras beads on the local environment while maintaining the essence of Carnival season.

"We want you to have fun with this experience," said Brett Hornsby, director of enrollment operations and technology. Three judges would determine the teams scores based on group participation and presentation, feasibility and academic validity, affordability and creativity.

Within minutes, the teams were laughing, brainstorming, researching, creating Power Points and doling out roles for the group presentation.

"We got past the awkwardness real fast," said Julia Lorthrop, an aspiring forensic accountant from Memphis. Before their presentation, Lorthrop's group stacked their hands together in a cheer. After the presentation, they formed a group chat to help themselves stay in touch.

Martin Smith, associate vice president for admissions and enrollment management, said that he was blown away by the students' ideas and presentations. The students all won another $3,000 or $4,000 more as a result of their work in competition. But Smith said he was especially pleased to see how quickly the incoming students were able to start building friendships.

"The additional scholarship is important, but it's not as important as the chance they've had to get together and form friendships and bonds," Smith said.

Hallie Rodriguez, one of the President's competition participants, said the experience definitely increased her interested in attending UNO in the fall. "I had an incredible experience at Explore UNO," said the Metairie senior, who plans to study English in the fall. She said that she especially liked the academic browse and the immersive community experience that the competition provided.

Iliana Paul Gindiri, 17, of Gilbert, Ariz., said she was excited by the University's diversity and the city's cultural opportunities. A self-described physics and math enthusiast, Gindiri said she first learned of UNO due to its program in naval architecture and marine engineering. But after visiting the campus, she said she was impressed by how friendly everyone was.

"I've never had so many people come up and talk," she said.

Just then, Nicklow, an engineer who used to reside in Arizona, walked up and started chatting.