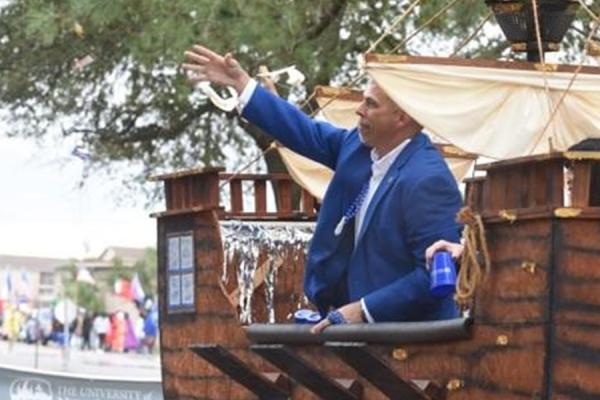 Under the theme, "Six Decades of Celebration," a salute to the University's 60 years, 37 campus organizations and departments participated in the parade and seemed undeterred by the intermittent rain that started to fall midway through the route. The Sophie B. Wright Charter School marching band joined the krewe, providing tunes to fuel the celebration.

Faculty and staff from the College of Business Administration boogied in spandex and blue capes as "Disco Divas and "Disco Heroes." Those with Department of Psychology wore rainbow tulle on their heads as 1990s Trolls under the theme "Mind Con-TROLL." The Privateers men's basketball team rode atop a sliver float that head coach Mark Slessinger borrowed from a neighbor.

Participants were to decorate bikes, wagons, scooters, cars, trucks or form their own marching clubs. And they did. The UNO Starlettes dance team strutted behind the President's float. Greek organizations road by float and truck. A "live" costumed crawfish represented the Crawfish Mambo spring event. Math professors handed out pencils.

Reagan Laiche, manager of operations in the Office of Student Affairs, headed the committee that organized the event. She said she was pleased to see an outstanding level of commitment from all the involved campus partners to make the event a success, rain or shine.

"It's not just a faculty and staff event," Laiche said. "It's not just a student event. This parade gives us an opportunity to all come together and celebrate as a campus."

Laiche said she was especially grateful to Marco Perez, general manager of the UNO Lakefront Arena, for his work arranging the line-up of the parade, and the Office of Student Involvement and Leadership for providing great support and volunteerism throughout the parade planning process.

The procession ended at the University Center, where campus food-service provider Aramark served participants and parade-goers 25 large king cakes along with iced coffee and other chilled beverages. Employees of the Office of Student Affairs helped pass out the king cake - with occasional help from Capt. BrUNO, the Privateers' beloved mascot that was first introduced to the University community one year ago at this same event.

While riders and spectators arrived at the UC a little damp from the weather, it was clear that the event fulfilled its aim of bringing the campus together for a little bit of Mardi Gras at New Orleans' only public research university.